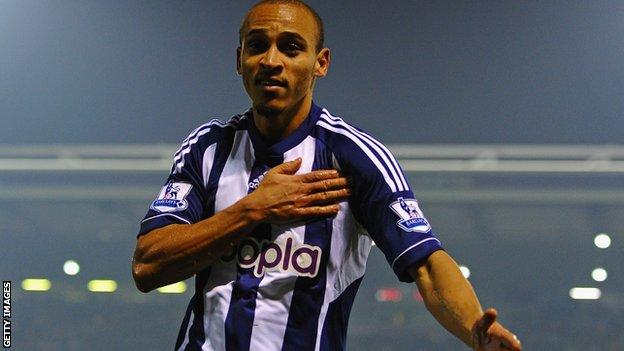 Peter Odemwingie says he is ready for a fresh start in the Premier League, after the striker joined Cardiff City from West Bromwich Albion in a £2.25m deal.

The Nigeria international, 32, has signed a two-year deal at the Cardiff City Stadium, after completing a medical on deadline day.

"I've joined a club with a strong determination to achieve their goals."

It brings to an end Odemwingie's three-year association with the Baggies, having joined in 2010 from Russian side Lokomotiv Moscow.

Peter Odemwingie shot to prominence when he scored two goals at the San Siro while playing for French side Lille against AC Milan in the Champions League.

He rejected late interest from both West Ham and Stoke City to join Cardiff.

"I'd like to thank the West Brom fans and staff for everything. I'll definitely take with me the positives and great memories," Odemwingie added.

"Cardiff City showed great intent to bring me here. I have to thank the manager and everyone involved in making this transfer happen.

"There are talented and dedicated players in the team, everyone is moving in the right direction and I also want to make a strong contribution as well."

Odemwingie started his career in Nigeria with Bendel Insurance before switching to Belgian side La Louviere.

Further stints at French club Lille and Lokomotiv Moscow followed before joining the Baggies for £2.5m in 2010.

He made 100 appearances, scoring 31 goals for the Midlands club.

Odemwingie failed in a bid to force a move to QPR last January and he has played a bit-part at West Brom since.

The striker has not played for Baggies boss Steve Clarke so far this season and was out of contract at The Hawthorns at the end of the season.

"I have a bright start ahead of me. There's no point looking back or worry over something you can't change. It's all in my past," he said.

"It's important to focus my energy on positive things. I can only wish everyone all the very best in life.

"It's been a year of learning, finding incredible joy with my young family and significantly a fresh beginning at Cardiff City.

"There are expectations and I honestly can't wait to get started."