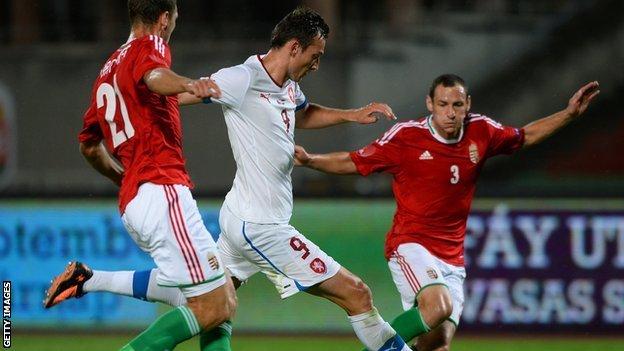 Aston Villa have signed Czech Republic striker Libor Kozak from Lazio in a deal worth about £7m.

The 6ft 4in player, who finished top scorer in last season's Europa League, has signed a four-year contract.

Kozak, 24, has represented his country four times and becomes Villa's seventh signing of the summer.

"He'll add greatly to what we've got," said Aston Villa manager Paul Lambert. "He has an unbelievable scoring record in the Europa League."

Lambert says his arrival will ease the pressure on fellow striker Christian Benteke, who has scored 22 times in 37 Premier League appearances since arriving from Belgian side Genk a year ago.

"We need somebody like him as we only have Christian Benteke really as a main target man," added Lambert.

Midfielder Stephen Ireland, 27, has joined Stoke City on loan for the rest of the season while Barry Bannan has signed for Crystal Palace on a three-year deal.

Villa manager Paul Lambert has already added to his attacking options this summer, with the signing of striker Nicklas Helenius from Aalborg.