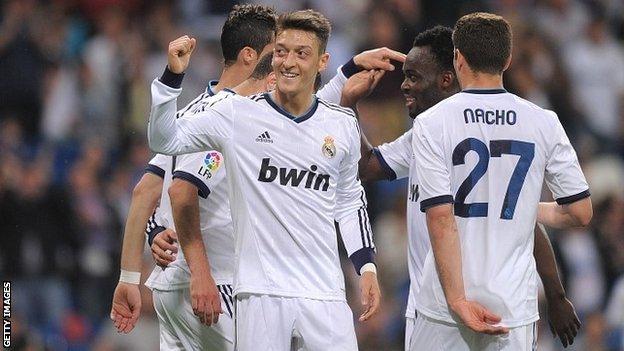 The Gunners shattered their record by buying the Real Madrid midfielder for £42.4m, while Manchester United moved late to sign Everton's Marouane Fellaini for £27.5m.

Liverpool brought in central defenders Mamadou Sakho and Tiago Ilori for a combined fee of about £25m.

In total, £140m was spent on deadline day in England, sending total outlays during the summer transfer window to £630m, a new record. The previous record was £500m in 2008.

Despite £85.3m coming into England from Real Madrid thanks to their world record purchase of Tottenham's Gareth Bale, the top flight still spent £400m more than it recouped in sales.

Premier League spending was up 29%, according to Deloitte's Sports Business Group. This comes on the back of a new television deal bring clubs an extra £600m revenue across the top flight.

Dan Jones, partner in the Sports Business Group, said: "The story of this summer transfer window is of new records: a new record for Premier League spending as well as a new world transfer record fee. "

The recruitment of Germany international Ozil on a five-year deal will appease Arsenal fans who have been waiting for a big-name signing and eclipses the £15m fee paid for Russian Andrey Arshavin in 2009.

Ozil, 24, regarded as one of Europe's best midfielders, said: "I am thrilled to be joining a club of the stature of Arsenal and am looking forward to playing in the Premier League. I am particularly looking forward to working with [Gunners boss] Arsene Wenger."

Tottenham were the biggest Premier League spenders this window having invested nearly £105m on seven new players as they prepared for life after 24-year-old forward Bale.

United also tried to sign Athletic Bilbao midfielder Ander Herrera and Everton full-back Leighton Baines before the deadline, but failed in their attempts.

They also tried to sign Real Madrid left-back Fabio Coentrao on loan right before the deadline,

Wigan midfielder McCarthy, 22, moved for a fee which Everton have stated is £13m, but the Latics say is in the region of £15m.

Liverpool avoided the last-minute rush by recruiting defenders Sakho and Ilori early on Monday while Nigerian forward Victor Moses has joined the Reds from Chelsea on loan.

Italian striker Fabio Borini left Anfield to join Sunderland on loan with former Liverpool defender Andrea Dossena, 31, also moving to the Stadium of Light from Napoli on a one-year deal.

Black Cats forward Stephane Sessegnon has moved to West Brom to join forwards Victor Anichebe, another late capture from Everton for a fee rising to £6m, and Shane Long, who remains at The Hawthorns having almost joined Hull.