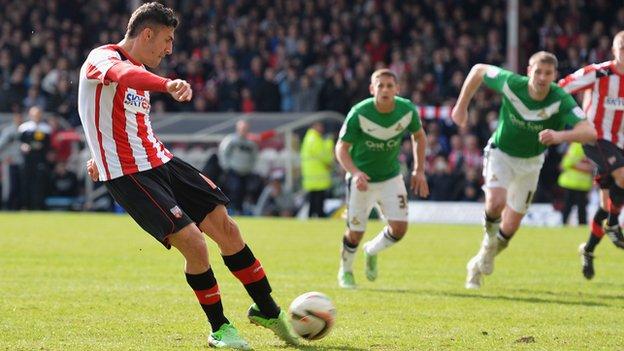 The Bees have done a second deadline day deal by bringing in 19-year-old Raphael Calvet from French second division side Auxerre for a small fee.

Trotta, 20, who has signed until 5 January, spent six months on loan at Griffin Park last season.

It was his last-minute penalty miss that cost the Bees automatic promotion on the final day of the season.

After hitting the bar, Doncaster Rovers raced straight back up the other end of the field to score the goal that won them promotion instead.

But Trotta did score six goals in 22 League One appearances, six of them as substitute. And Bees boss Uwe Rosler prefers to concentrate on the more positive aspects of his short move across West London.

"The mental strength he showed to come back after Doncaster and give a performance like he did against Swindon in the play-offs was something I couldn't have done when I was 30," he told the club's website.

"It is human nature to think that the glass is half empty and maybe remember the things which weren't working out.

"But I remember when he joined us on 24 November he then played every single game for us when we were unbeaten in 10 and won seven out of 10.

"That was due to Marcello coming into the team at the right time and giving us a big lift.

"He is still very young and he learned a lot last year."

As for Calvet, the French Under-20 international has signed a three-year deal.

"Raphael is a player that has represented his country at almost all age groups," added Rosler. "That Brentford can attract a player like this is very, very good news."

"Raphael is a man for the future. He is very good technically but he is also a defender that likes to defend.

"He has been educated tactically and technically, as you would expect from a player that has come through the French system."