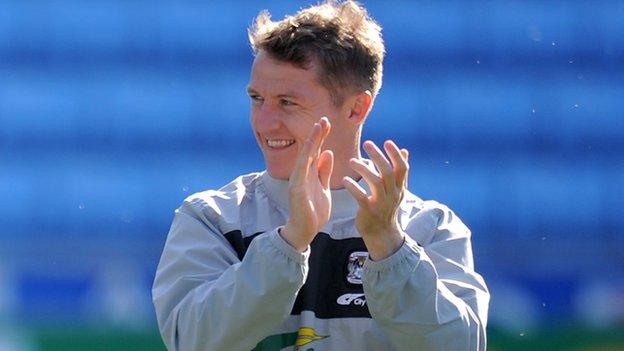 Coventry City have parted company with hometown boy Gary McSheffrey, one of their most prolific players.

The 31-year-old was one of eight players made available for offers in July by Sky Blues boss Steven Pressley.

Four found new clubs, but McSheffrey was one of the four who have so far not been fixed up.

And, along with midfielder Steven Jennings and defender Kevin Malaga, the long-serving forward has now had his contract cancelled by the club.

"The three were the last remaining players who were not in the manager's plans this season," said Sky Blues development director Steve Waggott. "So to have them all leaving and off our books is a positive move for all parties."

Striker Cody McDonald was first of the eight discards to leave, to return to Gillingham, where he spent part of last season on loan.

Midfielder David Bell was signed by Notts County, while keeper Chris Dunn was picked up by Championship side Yeovil Town.

And big defender William Edjenguele has gone to League Two side Bury.

Sean Jeffers is the last of City's eight unwanted players to sort out his immediate future.

Jeffers spent pre-season with another League One side Tranmere Rovers, where he declined the offer of a contract.

Coventry-born McSheffrey was handed his debut by Gordon Strachan as a 16-year-old as a late substitute in the 4-1 away win over neighbours Aston Villa in February 1999.

He scored 53 goals in eight years, mostly in the Championship after loan spells out at Stockport and Luton, before being signed by Steve Bruce for Birmingham City in August 2006.

But, after four years on Blues' books, including loan spells at Nottingham Forest and Leeds United, he returned to Coventry in the summer of 2010, since when he has added a further 19 goals in three difficult years.