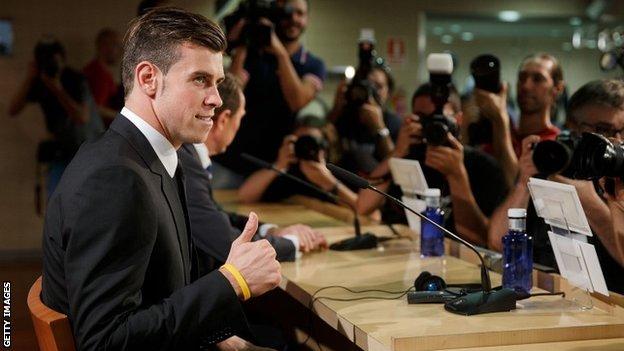 Gareth Bale is not certain to start for Real Madrid despite being the world's most expensive player, says assistant coach Paul Clement.

Wales international Bale, 24, who joined the Spanish side for £85.3m from Tottenham, could make his debut at Villarreal on 14 September.

But Clement told BBC Sport: "There's a lot of competition for places - no-one will be guaranteed anything.

"Coach Carlo Ancelotti has a clear idea how to use him but things can change."

Bale began his career as a left-back at Southampton before going to Spurs where he was first employed in the same position before moving further up the pitch.

Tottenham manager Andre Villas-Boas then used him in an even more advanced role, giving him freedom to roam along the forward line. He was the club's top scorer last season, with 21 goals in the league.

Former Manchester United winger Cristiano Ronaldo, like Bale, has moved further up the field during his career. He found the net 34 times for Real in La Liga last season and scored his 200th goal for the club in May in just his fourth season with the Bernabeu outfit.

And there has been debate whether Bale or Ronaldo will play the furthest forward.

"Carlo is flexible enough to use Gareth and other players in different capacities," Englishman Clement said.

"At Southampton, Bale played at left-back which he also did at Spurs where he became a more left-sided player.

"He recently became more central. He's got that versatility.

"It'll be interesting to see how players fit in together. We'll be trying to find their best position and what's best for the team as quickly as possible.

"Gareth has the goalscoring talent and ability to set up goals for others. We have a lot of exciting players here. [Striker Karim] Benzema is a great talent, while Isco plays in midfield but has chipped in with three goals already."

After finalising the deal on Sunday and having been presented to fans on Monday, Bale has rejoined the Wales squad for their World Cup qualifiers - in Macedonia on 6 September and at home to Serbia four days later.

"Depending on how much or little he plays will depend whether he trains a week on Wednesday or Thursday leading into the first game at Villarreal away [Saturday, 14 September]," added Clement.

Clement himself is still settling in at Real. He arrived in late June having been brought to the club by Ancelotti, with whom he worked at Chelsea and Paris St-Germain, after the Italian was appointed as Jose Mourinho's replacement.

The former PE teacher from the south London borough of Sutton, who progressed up the ranks as coach at Chelsea, said he had been taking regular Spanish lessons to help adjust to his new surroundings and to help with coaching the players.

Clement suggested it would benefit Bale to "knuckle down" and learn the language.

"It's more challenging for a coach and manager than a player," he continued. "Communication is everything - you have to instruct and organise.

"It's up to Gareth to learn. A lot of players start having lessons at the club when they arrive. [Croatian] Luka Modric, who played with Gareth at Tottenham, had some lessons initially - he speaks in Spanish and English with the players.

"I'm sure Gareth will do the same. He spoke some lines during the news conference. It's a great life quality if he knuckles down and learns. Our communication with the team as a whole will be in Spanish."