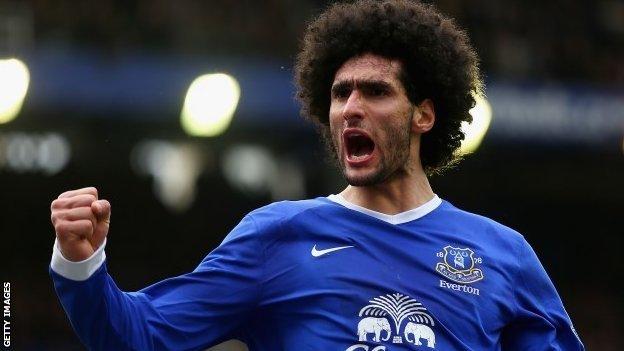 United had made a joint bid of £28m for both Fellaini, 25, and full-back Leighton Baines in August, which the Toffees had described as "derisory".

Fellaini had a release clause of £23.5m in his Everton deal until 31 July.

Being a Manchester United player is something every player dreams of

On Fellaini's signing, manager David Moyes said: "He is a player with great ability and strength and I think he will make a real difference to our squad.

"He can play higher up, if we need it, behind the striker or as a defensive or holding midfielder. In any position in the middle of the field he's comfortable.

"Because of that I think it's definitely a position where people have said we've been short of numbers, with the likes of Paul Scholes [retiring] and Darren Fletcher not ready to come back just now. I felt we needed to strengthen there and I'm glad we got him."

The Belgian, who joined Everton from Standard Liege for £15m in 2008, was contracted to the Toffees until 2016.

He said: "I am thrilled to sign for Manchester United. I have known the manager for many years now and I have a lot of respect for his way of working. When I was given the opportunity to work with him again, I jumped at the chance.

"Being a Manchester United player is something that every player dreams of and I believe that I can make a real contribution to the team's efforts to win trophies in the future."

Full-back Guillermo Varela and were their only other summer signings.

United tried to sign Athletic Bilbao midfielder Ander Herrera and Everton full-back Baines before the deadline, but failed in their attempts.

Old Trafford manager Moyes said after the 1-0 defeat at Liverpool on Sunday that the club would try to bring in more players before summer window shut, but added: "I'm more than happy with the players I've got."

Fellaini was signed by Moyes five years ago and was a regular first-team player for the Scot. Despite being a midfielder, he was used as an emergency striker during his debut season and scored nine goals.

The Belgian, who made his international debut in 2007, was also booked 10 times in his first 17 games, but avoided a lengthier suspension by attending a personal hearing with Keith Hackett, England's chief referee, where the player gave his side of events but also promised to improve his behaviour.

He suffered an ankle ligament injury in February 2010 that kept him out of the rest of the season and another ankle injury around the same time the following season that forced him to miss the remainder of that campaign.

Fellaini bounced back and had an impressive 2011-12 season and was awarded with a five-year contract in November 2011.

He finished last season as the Everton's top scorer with 12 goals in all competitions.

The deal was confirmed 51 minutes after the 23:00 BST deadline on Monday.