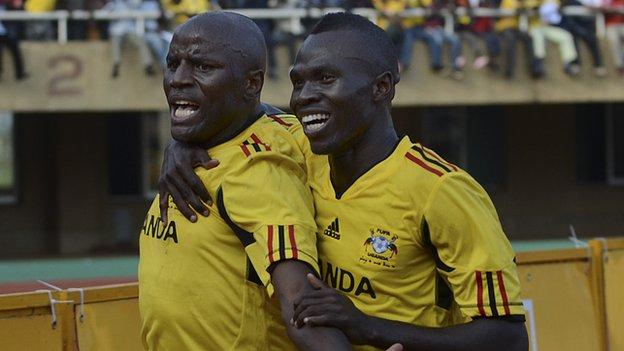 Uganda coach Milutin 'Micho' Sredojevic has dropped striker Geoffrey Massa (pictured on the left) from the squad to play Senegal in a crucial 2014 World Cup qualifier for being unfit.

The Cranes need a win in the Group J tie to qualify for the play-offs, while a draw will be enough for the Teranga Lions.

"Massa cannot be part of the team because he is unfit and yet we are going for a big match where we need all players fit," Micho explained.

"I know Massa has the potential but he has been very unfit - he's not even created a goal since he last scored against Zambia last year.

"He was very unfit in the friendly against Egypt last month in El Gouna."

The Serbian coach said that he had given Massa a chance to come and prove his fitness in the 3-1 friendly win over Botswana last weekend, but the player did not show-up.

Last week the 27-year-old Massa signed for South African side Amatuks (University of Pretoria) from Yenicam FC in Northern Cyprus.

The Cranes, who have never qualified for the World Cup, are now in Turkey for a four-day training camp before they travel to Morocco.

The game has been moved to the Moroccan city of Marrakesh because there is a Fifa ban on the main stadium in Dakar following the riots during a match against Ivory Coast last year.