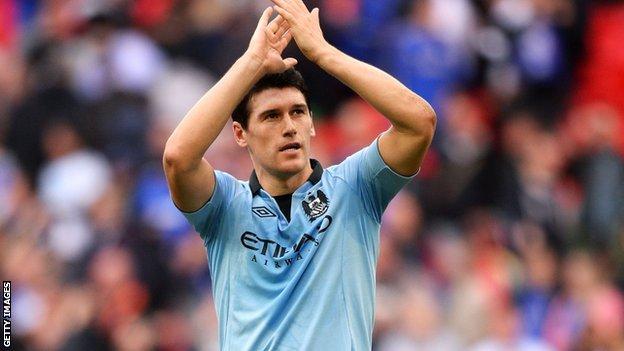 Gareth Barry says a lack of first-team chances at Manchester City was behind his season-long loan move to Everton.

The England midfielder, 32, was one of three new arrivals at Goodison Park on the final day of the transfer window.

"Once it's made clear those [first-team] opportunities aren't going to arise then, as an experienced footballer, you know you have got to try to move on," he said.

"I got my head around that and I'm grateful now to be at Everton."

Barry insisted that the move was not motivated by trying to earn a recall to the England squad ahead of next summer's World Cup in Brazil.

"My head has just been all about wanting to play regular football in the Premier League," he said.

"The main reason I have joined Everton is not to try to help my England ambitions - that will come if I am playing consistently well for Everton.

"At the minute, that [England recall] would be a bonus. Getting good form for Everton is my main target."

But after City's dismissal of Roberto Mancini as manager in May, Barry was told he was surplus to requirements.

"Straight away at the end of the season and start of pre-season, it was made clear I wasn't going to be guaranteed regular first-team football," he said.

"Being 32 in a big squad with a lot of players, I could have dealt with that but as pre-season went on it was pretty clear I wasn't going to feature in squads.

"I was going to have to wait for a couple of injuries. That's when my mind started thinking it could be time to look elsewhere for regular football."

"I went there to try to win trophies and I was lucky enough to win a couple. I have only good things to say about the club."

Barry will be a free agent at the end of his loan period and has not dismissed extending his stay on Merseyside.

"I want to concentrate on the near future, but you are always thinking ahead of yourself and you can never rule it out," he said.