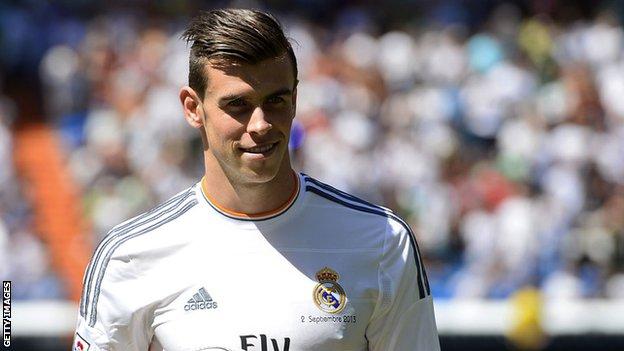 "Nowadays there is not another player in Europe or the world like him. He is strong, fast and scores a lot of goals," said Calderon.

"He can help the team reach their aims of winning the Champions League, the Spanish League and any other titles."

Bale was introduced to the Madrid fans at the Bernabeu Stadium on Monday, but Calderon warned that the world record £85m fee could weigh heavily on the player's shoulders at first, citing the example of Zinedine Zidane, who himself made a record-breaking switch to Real Madrid when he moved from Juventus for £48m in 2001.

"In his first season Zidane wasn't approved [by the fans] and was questioned in November of that season," he said.

"After that he was one of the players most loved and appreciated at Real Madrid.

"The price that the club pay for a new 'Galactico' can be a burden. The people who attend the Bernabeu Stadium are very demanding."

Calderon expresses his views in Gareth Bale - The Real Deal, a BBC Wales documentary that tells the story of Bale's journey from Cardiff schoolboy to the most expensive player in the history of the game.

His much-anticipated transfer from Tottenham was confirmed on 1 September and he was welcomed by a crowd of more than 20,000 in Madrid on Monday.

Calderon, the Real Madrid president from 2006-09, set the previous world transfer record when he bought Ronaldo from Manchester United in 2009.

He says only time will tell if Bale can justify his transfer fee and wages of £300,000 a week.

"We need to have a crystal ball to answer that," said Calderon.

"People said I was mad to pay £80m for Cristiano Ronaldo. But now everyone is happy. He has scored a lot of goals and helped us become much better. We have to wait for the results [to see if Bale is worth the money]."

Gareth Bale - The Real Deal is on BBC One Wales at 22.35 BST on Tuesday, 3 September