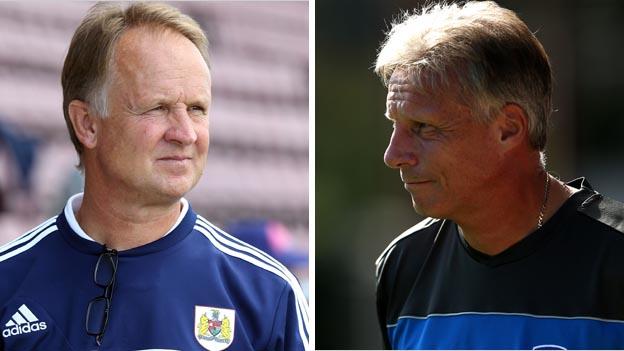 Bristol City and Bristol Rovers will face each other for the first time in seven years in the Johnstone's Paint Trophy on Wednesday.

Over 17,000 fans are expected at Ashton Gate for the first-round match.

Rovers were victorious last time out - a Rickie Lambert goal earning them a 1-0 home win on 27 February 2007 in the area final of the same competition.

"At the moment the game belongs to Bristol - not the competition or anyone else," said Pirates boss John Ward.

"It's really exciting and good for the supporters, particularly."

Lambert's goal saw Rovers progress to the national final against Doncaster, then managed by current City head coach Sean O'Driscoll, at the Millennium Stadium - where they lost 3-2 in extra time.

It is 10 years since League One City reached the final of the competition, claiming the trophy for the second time after beating Carlisle 2-0.

"First round JPTs are usually minimum gates," O'Driscoll told BBC Points West. "You usually get through them and wait for the later stages before the interest picks up.

"But this is something different. Hopefully it will be an occasion for football over anything else."

Ward has previously been in charge at six Bristol derbies- having first managed Rovers between 1993 and 1996 before a spell at City from 1997 to 1998 - and is aware of the task his League Two side have before them.

"They are tough opponents, especially away from home - they will be the favourites to go through," said the 62-year-old.

"I respect Sean a lot and his teams play very good football. It's a tough game for us, no doubt, but sometimes the underdogs come through. It will be interesting to see how my lads respond in a partisan atmosphere.

"We'll be outnumbered and probably out-shouted at times but we won't be out-tried."

O'Driscoll, meanwhile, is aware of the experience that Ward has collected from his time in the West Country.

"He's a bit of a legend in managerial terms," said the City boss. "He's been there and done it at the top level.

"Even though it's a big game, he'll be making sure nothing spills over into anything that can be reported on.

"I'm sure he'll play his part in trying to make it as good a game as we possibly can."