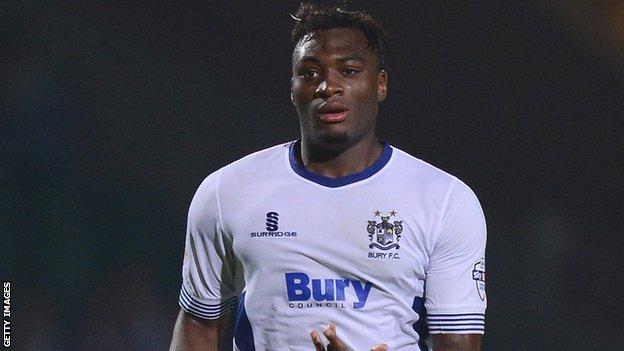 and were allowed to leave the troubled Sky Blues during the summer and agreed moves to Gigg Lane in June and August respectively.

"He works hard even when it's not going his way. He gets his head down. He's a great inspiration and mentor for me."

The 21-year-old continued: "The manager [Kevin Blackwell] asked me about him before he signed and I had nothing but a glowing response.

"He hasn't played any pre-season games and hadn't played a game since April, but he's worked hard on his fitness and he's been brilliant so far. It shows the professional that he is."

Neither have been involved in helping the Shakers keep a clean sheet this season - Cameron was suspended for the 3-0 win over Accrington on 17 August, while Edjenguele had yet to complete his move.

But both players have made an impact at the other end of the field, with French-born Edjenguele scoring in each of his first two appearances and Cameron's first goal in Bury colours coming in a in their last League Two outing.

Following their Football League Trophy exit at Port Vale in midweek, a local derby with Rochdale at Spotland is up next for Blackwell's side on Saturday.

"I don't know much about it coming from a bit further down south, but I know it will mean a lot to the fans to get a victory and that's what we'll be going there to do," added Cameron, who featured for Northampton in last season's League Two play-off final at the end of a loan spell with the Cobblers.

"The main thing is to get up into the top six as early as possible and then stay in there. We need to maintain our performances, and we're starting to get results now."