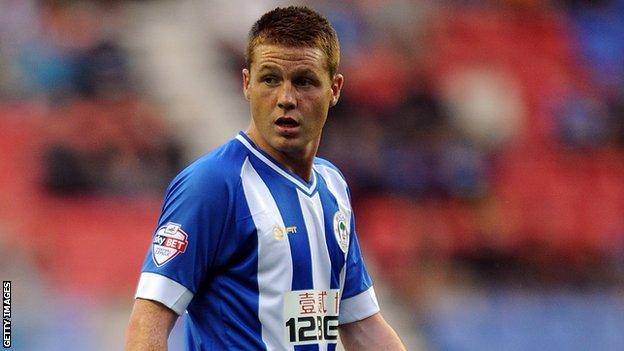 A cash windfall from the sale of will be used to develop more young talent, say Hamilton Academical.

The midfielder became the most expensive Scottish-born player when he was sold by Wigan for more than £13m.

And Hamilton are expected to receive a seven-figure sum following a sell-on clause in the 22-year-old's contract.

"It just will allow us to invest in our infrastructure," Accies chairman Les Gray told BBC Scotland.

"It will allow us to get back some money that the directors have put in for the synthetic pitch, etc.

"And it will allow our academy to continue to flourish and develop young players - and young Scottish players at that."

the new name for Scotland's second tier following the creation of the Scottish Professional Football League.

Asked if the money from the McCarthy deal would result in more players being signed during the January transfer window to enhance their promotion chances further, Gray replied: "Not necessarily.

"I think we have set our stall out this season with a young team and we've signed a couple of players to boost that prior to the window closing as a result of the restructuring.

"This money will just be invested in the club over the longer term and we'll make sure our club is financially stable and secure.

"We may, if we are in a good position in January, decide to improve the squad.

"Of course, we would do that anyway and this money would help us to do that if we chose to.

"But we won't be throwing money around. That's just not our way and it's not something we would like to start."

Glasgow-born McCarthy, who chose to play for Republic of Ireland, came through the youth ranks at New Douglas Park and broke into the first team at 16 before being sold to Wigan in 2009.

The initial £1.2m fee included a sell-on clause that will be activated by his transfer deadline-day switch to Goodison Park for what Everton say is a £13m deal and Wigan suggest is closer to £15m.

McCarthy was part of a talented trio who broke through into the same Accies team, with fellow midfielder James McArthur following him to Wigan and full-back heading for a less successful spell with Burnley.

"I think there are several clubs already doing this," he said.

"Falkirk would be one of them, Livingston and ourselves, Stenhousemuir, to name but a few clubs who are investing heavily in their infrastructure and their youth teams.

"And a lot of these young players are getting an opportunity to play first-team football now and the very best players, if they are given time on the park, will develop and will sell on down south and will bear fruit at some point in the future.

"The problem we have is there's too many journeymen and too many people coming from other countries playing here and not enough young Scottish boys getting a chance."