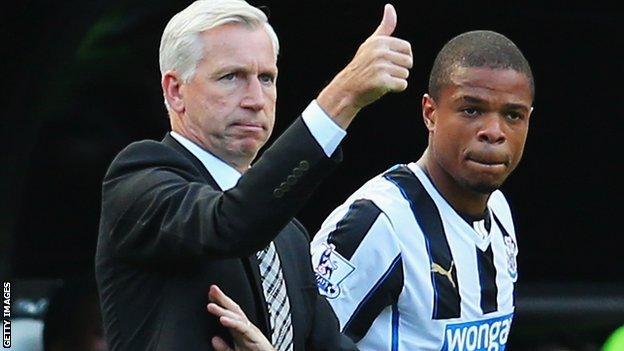 Striker Loic Remy, 26, came in on loan from QPR as the only notable capture by the Magpies after Joe Kinnear arrived as director of football.

Alan Pardew on Saturday was keen to strengthen his squad and talked about targets in front of Joe Kinnear. The statement under his name doesn't tally.

"However, some of the options available within our financial means were not as good as the players we already had."

In a statement attributed to him and issued by the club, he is quoted as saying: "There is no point bringing in new players unless they can improve us and take us forward."

Newcastle's other transfer business during the summer involved signing midfielder Olivier Kemen, 16, for their development squad.

The Tyneside club, who narrowly avoided relegation last season, did manage to hold on to France midfielder Yohan Cabaye, 27, despite a bid from Arsenal.

And Pardew highlighted the club's business in January as he explained the club's lack of transfer activity this summer.

"We did the majority of our business in the January window, signing five excellent first-team players," he said.

"With the strong squad we have we should all approach the season in a positive, optimistic frame of mind."