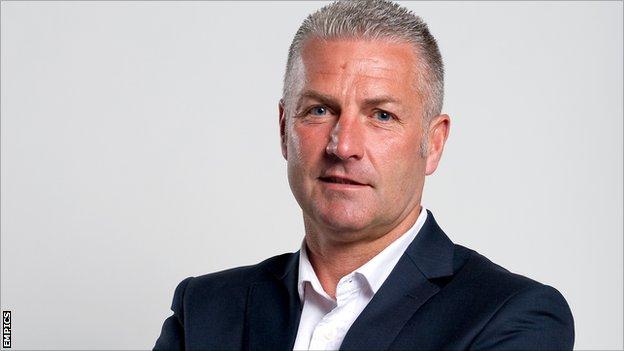 Like many of Brian Clough's former players, new Gateshead manager Gary Mills has brought certain influences from the great manager to his coaching style.

Then again, like many of Clough's ex-pupils, he is no carbon-copy.

"But I'm my own man, if you try to copy Clough you'll fall flat on your face.

"He was a genius in every way you could think of, and I think there's been quite a few players who played under him that went into work with the same philosophy and it's no secret most of them have been successful."

Having been part of Nottingham Forest's short-but-sweet period of success under Clough in the late 1970s and early 1980s, it is no surprise such footballing habits were instilled.

I'm more than pleased to be here as their manager, I didn't just want a job. This feels so right, I can't explain to you

Mills' penchant for passing earned him plaudits and promotion to the Football League at York City, with all the hallmarks of Clough's blueprint.

He also won the FA Trophy at Wembley that same season, a remarkable double for the Minstermen in 2012.

"People will soon learn that is what I demand, what I want and that's what the players that play for me want and I respect that.

"I enjoy it, I smile when I do that and I want to smile a lot while I'm here, I want to be successful."

In addition to Clough, Mills played his career under a variety of high-profile managers - including Neil Warnock, Brian Little and David Pleat - all of which helped shape his outlook in a variety of ways.

"It happens with every manager you play under, [what you learn are] not necessarily positives as some are negatives that you think, 'I don't ever want to do it like that', and that's a good thing.

"Otherwise if you took everything on board I think you would also fall flat on your face. I think it's about man-management, it's treating your players in the right way.

"It's not about throwing teacups or raising my voice as a manager because I think I have to do that, it's about being respectful, the players have to earn that respect.

"I played under David Pleat, Howard Kendall, John Barnwell, Brian Little, some decent managers with good CVs who have done really well in the game.

"From that, with my enthusiasm and my desire for the game, I do things my way."

Brian Clough gave Gary Mills his debut for Nottingham Forest as a 16-year old, as the defending champions beat Arsenal 2-1 at the City Ground in September 1978.

He made a further five appearances that season, but it was the following campaign in which he began to establish himself at Forest.

Three appearances in the European Cup, including a start in the 1980 final victory against Hamburg capped a season in which he made 20 starts.

Later in his Reds career he would feature in the run to the 1984 Uefa Cup semi-finals before losing in controversial circumstances to Anderlecht.

His time under Clough ended with a move across the Trent to join Notts County in August 1987, having made 142 appearances.

Gateshead provide a new challenge for Mills, who has also managed Notts County and Tamworth.

Funded on a full-time basis by chairman Graham Wood, the Tynesiders have invested in playing talent with strikers Richard Brodie and Adam Boyes both prolific at Conference level.

However a quiet start to the season has brought just one win from six games, something Mills is determined to put right.

"Whatever team I put out there I want the fans to support them, if I feel it needs to be changed I'll change it within the game because I get paid for.

"That's my philosophy. Enjoy it but do it a right way."

While Clough came down from the north east to stir up East Midlands football, with hugely successful spells at Derby County and Forest, Mills has gone in the opposite direction in an attempt to repeat his success with York on Tyneside.

"That's my goal, that's my aim, I've got the facilities here to do that, everything I'd need and want and there's no excuses.

"They're fanatical, I love that, because I love football myself. There's a lot of people in football but don't really like it, but they're in it. I'm in because I enjoy the job. I love the job.

"I'm going to enjoy meeting everybody up here, they're fantastic people. I want to get to meet people very quickly, want them to know me and trust me.

"I'm more than pleased to be here as their manager, I didn't just want a job. This feels so right, I can't explain to you."