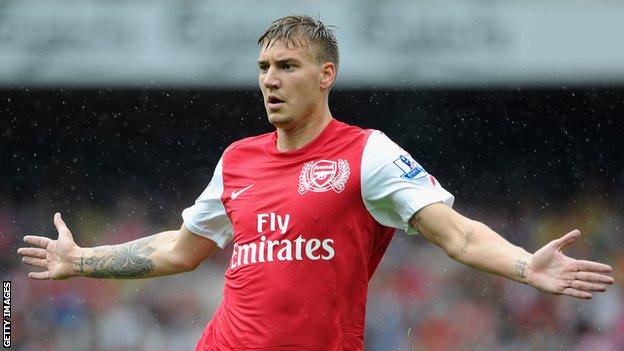 Nicklas Bendtner has insisted he is fully committed to Arsenal after moves to "more than one club" fell through.

The Denmark striker was linked with Crystal Palace but the Gunners did not want to sell after failing to sign Chelsea forward Demba Ba on loan.

Bendtner, 25, has not played for Arsene Wenger's side since August 2011 and has been loaned to Sunderland and Juventus.

"I want to assure all Arsenal fans that I will give everything I have to contribute," he said in a statement.

Bendtner, who is recovering from a broken wrist, was set to leave Emirates Stadium on transfer deadline day after nine years at the club and has admitted being "very disappointed" a move did not materialise.

"It's no secret that Arsenal and myself had agreed that I could leave the club during the 2013 summer transfer window subject to an agreement between all parties," he said.

"An agreement had been reached with more than one club, but as Arsenal were unable to secure the services of another striker they reserved their right to not sanction any deal.

"I was looking forward to a new challenge, with a new club and a fresh start in English football."

But he added: "Many things have been said about where my future lies after many years at Arsenal. The truth is I just want to play football which is when I'm happiest and Arsenal is a fantastic environment for any professional to apply their trade.

"Following positive talks with the manager, I am looking forward to working hard to regain full fitness and doing my very best to help the team and the manager fulfil our objectives and ambitions this season."