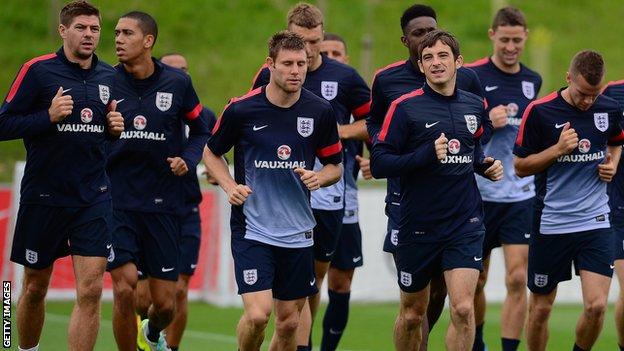 One of the most significant trends to emerge from this summer's transfer window is - once again - the Premier League's reliance on foreign talent.

According to consultancy group Deloitte, England's top 20 clubs spent a record busting £630m in this window - but only £60m of that was on English players.

Put another way, 90% of the money invested this summer was on foreign stars.

It's a statistic which will only reinforce the view held by England manager Roy Hodgson that he is working with a dwindling pool of top-class players.

Over the course of the next week the football agenda will switch from club to country and England's World Cup qualifiers against Moldova on Friday and Ukraine next Tuesday.

But before a ball is even kicked new Football Association chairman Greg Dyke will deliver a key speech which could have even longer-term implications for the health of the national team.

Since taking over in June, the former BBC director general and Manchester United director has been taking soundings from people across the game on the FA's most daunting challenge - namely how to make the England team a force in world football.

On Wednesday at Millbank Tower, just along the River Thames from the Houses of Parliament, Dyke will try to reset the national game's priorities.

According to sources sounded out in the past few weeks, Dyke is keen to make a grand statement about the vision for his four-year term as head of the FA.

Central to that is the health of the England team, but plans to reveal exactly how that might be achieved are believed to have been watered down as Dyke has come to understand the complexity of the issue.

Instead we should expect Dyke to issue a challenge to the Premier League and the rest of football to search for new answers to the age-old question.

As one FA board member told me, this should be seen as the start of a process, not the end.

There has been talk of a voluntary agreement between the FA and the Premier League to put England first - particularly in those seasons which culminate in international summer tournaments. This would mimic a similar agreement in place in German football between the Deutsche Fussball Bund and the Bundesliga.

This could mean anything from new rules on the release of players to the introduction of a winter break, or maybe the rescheduling of big domestic fixtures to avoid clashes with important England games.

The idea of a gentleman's agreement on home-grown player quotas has also been mooted but it's difficult to see how this can be made to work. Such a quota would be open to legal challenge under European law and besides, clubs would never agree to anything which restricted their freedom to pick teams as they see fit.

Squad for World Cup qualifiers against Moldova and Ukraine

The league says any quota system which forces managers to pick a certain number of home-grown players will not only weaken Premier League teams but also the national team in the long run.

And if challenged by Dyke to put England first, the Premier League will counter it already does this.

It will point to the £340m invested centrally in the elite player performance plan - introduced in the wake of England's abject performance during the 2010 World Cup.

It will point to the home-grown squad quota rule which dictates that almost a third of Premier League squads must be home-grown.

And it will turn its fire back on the FA, saying the governing body needs to restructure Team England to match the quality and performance targets set by clubs.

As the recent spat between Premier League chief executive Richard Scudamore and England boss Hodgson showed, this is a debate which divides more than it unites, and ultimately the league will agree to nothing which damages the success of its competition.

Dyke's challenge on Wednesday will be to try to start a process which tilts the balance back towards the national team at the same time as avoiding a major confrontation with the people best placed to deliver that shift.