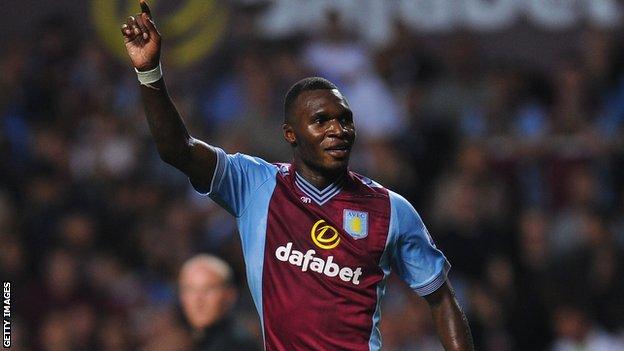 Russell Martin believes he has a blossoming partnership with Grant Hanley that can cope with "one of the world's hottest strikers" on Friday.

Aston Villa's Christian Benteke will in their World Cup Group A qualifier.

"We were disappointed to but we did well and hopefully there is a partnership there."

It is Belgium's golden generation coming through. It is no coincidence as they work extremely hard on their youth set-up over there

Norwich City defender Martin, who is more accustomed to playing full-back, has been relishing his role as a central defender for the national side beside Blackburn Rovers 21-year-old Hanley.

"He's obviously a young player, but he's a good defender," said the 27-year-old who put the goals conceded late on in a 3-2 friendly defeat against England down to early-season tiredness and disruption caused by so many substitutions in the friendly.

While Martin was dropped to the Norwich bench for Saturday's 1-0 win over Southampton, Benteke has continued his promise of last season by scoring four goals in as many games for Aston Villa this term.

"There's a lot of good strikers in the Premier League, but at this minute in time he's probably right up there with the best strikers in Europe," said the Norwich defender.

"He is a world-class player and he's a physical player as well."

Martin thinks Belgium justify their ranking of 10th in the world but has faith in the improved form shown by Scotland under Gordon Strachan in the 1-0 win in Croatia and the defeat by England at Wembley.

"I am confident we'll be okay," he said.

"We're at home and we'll have the crowd right behind us. After the last two performances, regardless of the last result, we've got plenty to be positive about and plenty to look forward to going into a big game."

Martin thought Scotland's recent improvement was down to "the way the manager wants us to play attacking football, the way he wants us to keep the ball a lot more than we have been doing".

"There's been a lot more togetherness in the way we've defended and there's just being regular faces in the squad," added Martin.

Nevertheless, he believes Belgium will be one of the main challengers come the World Cup finals in Brazil regardless of Friday's result at Hampden Park.

"If they qualify from this group, which I'm sure they will, they will be right up there and will be a force," he said.

"It is their golden generation coming through. It is no coincidence as they work extremely hard on their youth set-up over there.

"They are powerful, but they've got match-winners in their team as well.

"If you look at their team, they all play for top leagues throughout Europe, many Premier League players, so it makes it tough.

"But we're at home, we'll try to play the way we want to play, at the tempo we want to play at and hopefully go toe to toe with them and see how we come up."