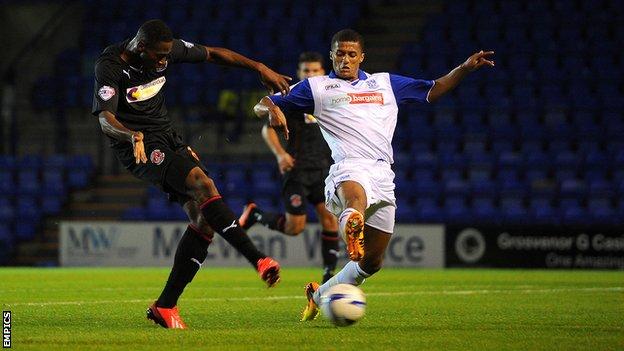 Manager Graham Alexander says Jamille Matt will gain confidence from scoring both goals in Fleetwood's 2-1 win at Tranmere in the Football League Trophy.

had only netted four goals in 19 previous games.

"Strikers thrive on goals," Alexander told BBC Radio Lancashire. "We ask them to be team players and if they don't score and we win, we're just as happy.

He'll do great for Grimsby because he's a terrific pro

"But we know the nature of the beast is that they like to score goals. That should be a great boost for Jamille."

The League Two side fell behind to Evan Horwood's first-half free-kick at Prenton Park, but 22-year-old Matt - a £300,000 addition from Conference Premier outfit Kidderminster Harriers in January - scored twice after the break to send Fleetwood through to the second round of the northern section.

Matt's only previous goal this season came in a 3-2 home defeat by Burton on 17 August.

Meanwhile, Alexander has backed defender Alan Goodall to after joining the Mariners on deadline day.

Goodall, 31, had not featured for Fleetwood so far this season, having been a regular following Alexander's appointment as manager last term.

"I've got nothing but good words to say about him because he was fantastic for us last season, but at his age he needs to play football and he knows that as well," he added.

"He'll do great for Grimsby because he's a terrific pro."