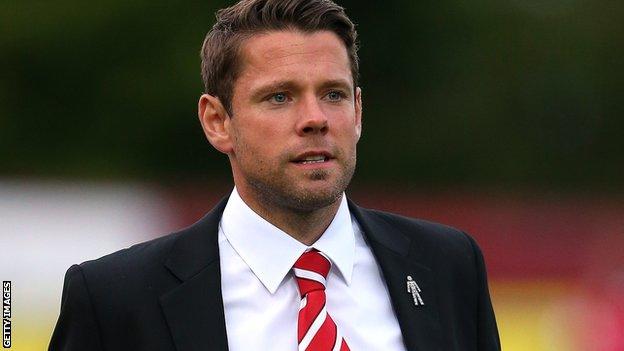 Accrington Stanley manager James Beattie expects to make loan additions to his squad after experiencing a frustrating end to the transfer window.

"We tried to add to the squad in the window and things just didn't quite work out," the 35-year-old told BBC Radio Lancashire.

"But things are lined up for next Tuesday when the loan window opens and it will be a different outlook."

Beattie added that the collapse of a permanent signing was due to people at the other club involved in the transfer being "extremely busy", while a separate loan deal was not completed as the parent club wanted Accrington to contribute a high percentage of the player's wages.

Everybody's disappointed because of the result, but buoyant because we're performing quite well

A second-half header from midfielder Chuks Aneke condemned Accrington to a 1-0 defeat at Crewe on Tuesday, ending Stanley's involvement in the Football League Trophy and extending their run of losses without scoring to five.

But Beattie is confident that fortunes will turn for his side, who lie bottom of League Two.

"When we get one goal, more will follow," he said. "Everybody's disappointed because of the result, but buoyant because we're performing quite well. We're not getting what we deserve at the moment but it will change.

"It's a squad that we'll try and add to when we need help, and at the moment we do need a little bit of help.

"They're great lads and I love working with them, and we will turn this around. It's just a case of getting one [win] and then the gates will open."

Left-back Michael Liddle is likely to be out of Saturday's League Two game at Chesterfield after suffering an ankle injury in the defeat at Gresty Road, while captain Luke Joyce was withdrawn as a precaution at half-time because of a groin problem.