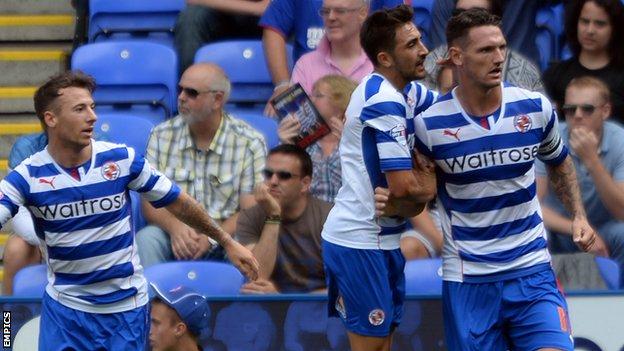 Reading director of football Nicky Hammond says the club are still hopeful of bringing a striker into the club.

The Royals saw deals for several forwards collapse before transfer deadline day, but will now pursue the option of a loan signing.

Reading have signed full-back Wayne Bridge and midfielders Royston Drenthe and Danny Williams since being relegated from the Premier League.

"We would like to bring another striker to the club," Hammond said.

"There are one or two targets we lost out on earlier in the summer, then when we came to the end of the window there wasn't a deal that was right for the club and feasible.

"Understandably, people will be slightly frustrated, on the football side myself and (manager) Nigel (Adkins) were as well, but if you look at the business in the Championship, there's not been an amazing amount done because you're playing second fiddle to the Premier League," he told BBC Radio Berkshire,

Despite the need to bring a forward in, Hammond says the club will not over-stretch themselves financially to do so.

"Were we in a position to buy a striker that was potentially on our list? Financially we weren't in that position because you still have to run a club in a sensible fashion and you'll see the same at other relegated clubs," he added.

"The only way to get someone out of the Premier League is to pay over the top. You pay an enormous amount more in terms of transfer fees and a massive premium on wages, above and beyond what you're already paying in the group.

"We have come out of the Premier League and the club has to continue to function sensibly. We lost £30m in revenue but still have a very strong squad and a very competitive wage bill for the Championship.

"Yes, we have a large parachute payment, but as I say a very, very good wage bill as well."