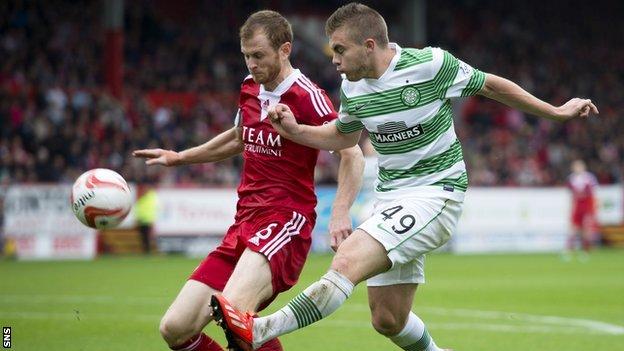 The average cost of the cheapest season ticket in the Scottish Premiership has fallen by 1% in the past year, BBC Sport Price of Football found.

Research also found that the average price of the top flight's cheapest match-day tickets rose by 3%.

Inverness CT continue to boast the cheapest day out, with their lowest-priced ticket, a pie, a cup of tea and a match programme costing £20.60.

The equivalent at the home of champions Celtic is £30.40.

It found Kilmarnock's lowest-priced season ticket at Rugby Park, costing £210, is the cheapest in the Scottish Premiership while the league's most expensive offering is from Celtic's highest category, at £509.

However, the Glasgow club's cheapest season ticket (£287) and their priciest are both £100 down on last year.

At £35, the most expensive match-day ticket is at the home of Hearts. That price is almost double the cheapest match-day ticket at Tynecastle but the club, in administration since June, have lowered their cheapest season tickets by £30 to £280, with the priciest option remaining £480.

Promoted Partick Thistle offer match-day tickets at £20 but have continued their policy of offering free admission to supporters aged under 16.

"Partick Thistle are proud to be the only club in the Scottish Premiership to continue to offer our junior supporters free entry to all league fixtures," said football operations manager Michael Max.

"We do not think our pricing structure for kids can be matched by any club in the country, something we are extremely proud of."

Dundee United and St Mirren run a free ticket scheme with local schools, while most clubs offer free season tickets for younger fans when bought with an adult ticket, though the age range for qualifying juniors varies between under-12 and under-16.