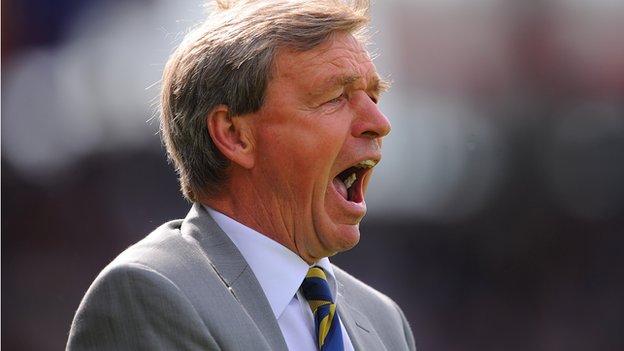 Shrewsbury Town manager Graham Turner is frustrated at his side not having an immediate chance to get back to action following Tuesday's Johnstone's Paint Trophy embarrassment.

Town were beaten 4-1 at the Meadow by Oldham Athletic, their worst home defeat since Turner returned to take charge three years ago.

But Town have had this Saturday's game against Bristol City called off.

"We've had the Bristol City game called off quite late on due to them having players called up for internationals.

"With them playing on Wednesday night, and a local derby too, I thought we might have caught them just at the right time.

"But at least it gives us an opportunity to take stock and do something about it, because we can't put in a performance like that again."

Town will instead return to action at Crawley on 14 September, when they are likely to be without injured skipper Tamika Mkandawire.

Having already made six changes to the team that drew 1-1 at home to Coventry last Saturday, Turner's pre-match plans misfired against Oldham when Mkandawire had to be substituted after just six minutes with a hamstring injury.

"He could be struggling for a couple of weeks," said Turner. "It's the sheath of the hamstring which has been damaged. Crawley might just be too early for him."

Following Mkandawire's abrupt exit, Oldham took the lead just two minutes later through Danny Philliskirk, who then doubled their lead before Adam Rooney made it 3-0 inside 42 minutes.

On-loan Aston Villa striker Graham Burke pulled one back just before the break, his first goal for the club, but Sidney Schmeltz restored Oldham's three-goal lead with 15 minutes left to send Town out of the competition early for the third season running.

"You take responsibility as manager for team selection, but you can't expect to play like that and get away with it," said Turner.

"Joe Anyon came in for only his second game for us in goal and the people in front of him let him down.

"We couldn't cope with Oldham's movement. That first half hour was the most inept performance we've put on for a long time."