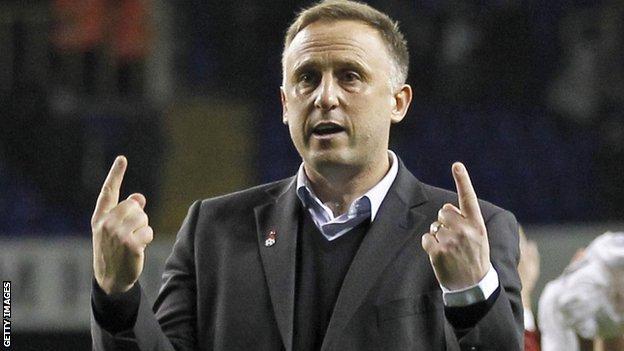 The Robins have only taken four points from five League games - their worst start since the 2008-09 campaign.

And although they were knocked out of the Trophy on penalties after a 3-3 draw in normal time, Yates was encouraged by their showing.

"Our season has finally started," he told BBC Gloucestershire.

"I see a bit of light and I think the players do too.

"There's now a bit about them in the dressing room. They're disappointed, but they know they've done alright and on another night they could have easily won the game."

Hamza Bencherif gave Plymouth a two-goal cushion, but Curtis Nelson was then sent off for a foul on Gillespie, and the Fleetwood striker scored the resulting penalty, before Jason Taylor brought the Robins level.

Despite their comeback, Cheltenham were unable to see it through on penalties after Terry Gornell missed their fifth spot-kick and Argyle's Marvin Morgan stepped up to secure victory.

"The goals we let in were poor on our part," added Yates. "We kept 20 clean sheets last year through hard work and determination, but we're not doing it now.

"The boys are pretty low but I thought we played some really good football at times. There were some positives and, finally, our season might have started."