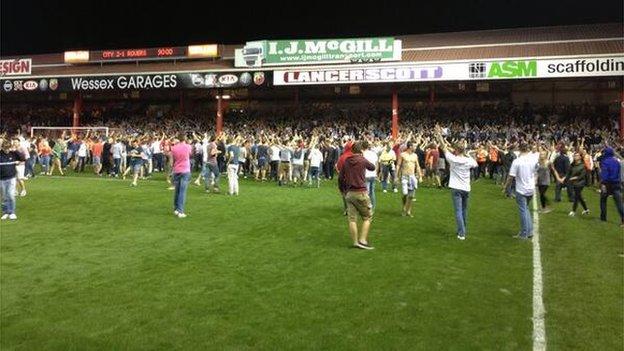 City reached the second round of the competition with a 2-1 win at a sold-out Ashton Gate on Wednesday night.

But riot police were called into action after the final whistle when a large number of fans ran on the pitch.

"Why you can't behave at a football match is beyond me," Rovers manager Ward told BBC Radio Bristol.

"Sean doesn't want it; I don't want it. We said it before the game. Why don't people listen?

"I'm not a Bristolian but I'm an honorary one. I think it's a great place to be and when people spoil it like that it hurts me as if I was born and raised here.

"I'm really disappointed in that, but the players, management and officials on both sides did the game proud."

The Football Association have confirmed they have written to Bristol City to ask for their observations on the incident, and the club are co-operating with their enquiries.

Avon and Somerset Police said 19 people were arrested as a result of the disturbances and three police officers received medical treatment for non-serious injuries.

In a statement, Bristol City condemned the actions of those spectators who invaded the pitch and said they would "take the strongest possible action against anyone found guilty of violent conduct".

"The joy of winning the first competitive Bristol derby in six-and-a-half years should have been remembered for all the right reasons," it said.

This sort of behaviour is unacceptable and cannot be tolerated. We believe strongly Bristol City is a family friendly club, which is safe for supporters of all ages.

"Instead, actions from the minority of the near 18,000 crowd has thrust the club into the national media's eye for the wrong reasons.

"This sort of behaviour is unacceptable and cannot be tolerated."

And O'Driscoll echoed Ward's sentiments, adding: "I was happy until the final whistle. It's taken the shine off everything.

"The players behaved competitively but not overzealous. It was spoiled by the actions of supporters and it's disappointing."

It was the first Bristol derby in seven years and tensions were high from the outset.

Jay Emmanuel-Thomas put City ahead with a stunning 30-yard shot after only 12 minutes.

Rovers defender Mark McChrystal equalised after the break with a header from Lee Brown's cross, but Bristol-born Joe Bryan won it for the hosts with a curling effort from inside the box.

League One side City are now unbeaten in four games in all competitions, and O'Driscoll added: "You wouldn't begrudge Rovers a goal but our reactions were really good.

"It's important that we put a run together and we're slowly doing that now. More performances like that will get us where we need to be."

Despite the result - which came off the back of a 1-0 win over Northampton in League Two - Ward praised his players for their ability to match the higher opposition.

"I'm not disappointed at all," he said." We've performed well against a team who, eight months ago, were in the Championship when we were in the doldrums and going in to non-league.

"In those eight months, we've rallied around really well and we'll take good things from a one-goal defeat."