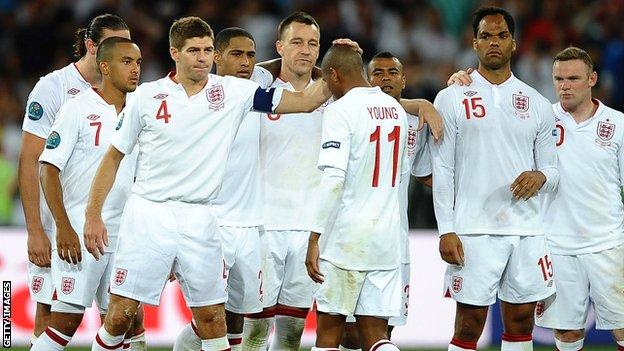 Football Association chairman Greg Dyke does not expect England to win the 2014 World Cup in Brazil.

Dyke told a conference in London on Wednesday that the national team should aim to reach the Euro 2020 semi-finals and win the World Cup in 2022.

On Thursday, he told the BBC's Today programme: "It doesn't mean we can't do well in Brazil as long as we qualify."

But he added: "I don't think anyone realistically thinks we are going to win the World Cup in Brazil."

England face a crucial few days as they attempt to qualify for the 2014 World Cup.

Roy Hodgson's team, who were eliminated at the quarter-final stage in Euro 2012, play Moldova at Wembley on Friday - a team they beat 5-0 in the away fixture last year - then face Ukraine in Kiev on Tuesday.

England are currently second in Group H, two points behind Montenegro, who have played a game more.

Dyke, who took over as FA chairman from David Bernstein in July, is confident England will qualify for Brazil but is keen to stress it will be difficult for the team to succeed in South America.

"I asked a bunch of journalists what would be seen as doing well in Brazil," Dyke told BBC Sport. "The consensus was if we reach the quarter-finals we'll do very well.

"That's not to say we can't win. But let's not kid ourselves, it's pretty hard to win in Latin America anyway for a European side. We're certainly not going to go there as odds-on favourites, that's for sure.

"Finally read Greg Dyke's speech. Some realism as to issues, some fantasy as to targets. Unless PL & FA unite, it's all pie in the sky.

"Things are improving, small-sided games and pitches, better coaching, but will take time and patience. There is NO quick fix!"

"Obviously, I thought about that, I discussed it with Roy Hodgson. He knows that we want to do the best we can possibly do at every tournament and I believe we will qualify for Brazil and we can do OK."

On Wednesday, Dyke described the reduction in the number of English players in the Premier League as a "frightening trend" and said: "English football is a tanker that needs turning."

He later told the BBC: "The real challenge for us looking forward is that we've gone from 70% English players in the Premier League to 30% and it's still falling.

"If that continues, we won't have a chance in hell in future tournaments. We have got to stop that decline and we've got to get more English players playing at the highest level."

The commission will begin its work later this month and aim to publish its evidence and recommendations by spring 2014.

Dyke hopes former England managers such as Fabio Capello and Steve McClaren will give their views on the English game and also wants Premier League chief executive Richard Scudamore, along with representatives of other English leagues, to attend.

Asked if sufficient compromise can be reached over the competing interests of the professional game and the needs of the national side, Dyke said: "Everyone in football wants a successful English team.

"Does it mean compromises? Probably. Are those compromises too great? I don't know yet."

Dyke admitted the hardest task would be to implement any ideas the commission came up with.