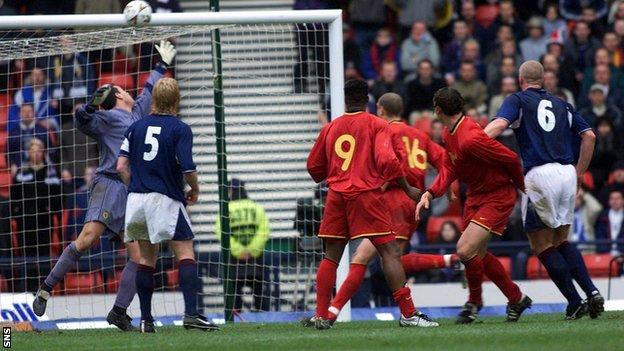 What's not to like about the Belgian national team?

So often in recent years, the Red Devils have lived in the shadow of their more successful European neighbours France, Germany and the Netherlands.

Not too mouthy and generally keeping themselves to themselves, antagonism isn't really their bag.

Scotland can even begin to take a bit of comfort by finding some common ground with Friday's visitors to Hampden.

Belgium have not been at a major international finals since 2002 - that's two World Cups and three European Championships, which is only a little better than our recent malnourished tournament past.

Belgian brilliance in the Premier League

So who can begrudge them this 'golden generation' - a group of players who have propelled Belgium to their highest ever Fifa ranking of 10th and the brink of qualification for Brazil next year.

Well, in actual fact, several Scots are still sore from a wound the Belgians inflicted, one that arguably remains open, back in a crucial World Cup qualifier at Hampden on 24 March, 2001.

Then they snuffed out Tartan Army hopes by winning the group's final match in Brussels to secure a play-off spot, two points ahead of Scotland, and qualify for South Korea.

Many say Scotland have never quite recovered from that particular match in Glasgow.

"In all the games I had with Scotland, that's one where I fault myself badly. When we went into the last five minutes, there's no question I should have stopped the game and put on a couple of subs.

"I was suspended for that game and wasn't in the usual dug-out seat. I was signalling down to Archie Knox but he gave the impression we were all right.

"That's the worst pain of any game I had from 70 games with the team."

And it all came after Billy Dodds had earlier fired Scotland into a 2-0 lead.

"There are two games that always haunt me," Dodds told BBC Radio Scotland. "The England game at Wembley and the Belgium game at Hampden.

"It was horrible. They were a good team but they weren't brilliant and we should've won.

"On a personal level, I got two goals but it was the biggest kick in the teeth I'd had in a long time."

Time for closure, then?

Gordon Strachan's side can no longer qualify for Brazil 2014, but a home win over the now star-studded Belgians would help ease the pain of 2001.

The Scots have their motive, but do they have the means?

The interpretation of 'Scotland the brave' seems to be changing.

Lessening is the traditional idea of simply putting your body on the line, being strong in the tackle and clearing the ball into touch.

Bravery these days is much more about being willing to take possession; being prepared to show for the ball in tight areas and retaining it.

Scotland showed they could do this against England in their August friendly.

"We work on that a lot with this manager and this staff," explained defender Russell Martin.

Brown on the Strachan effect...

"There's definitely a spirit about the team. I'm very impressed with the body language of the Scotland players; the way way they come out at the start of the game and after the interval. What Gordon Strachan, Mark McGhee and Stuart McCall have managed to do is make players have a wholehearted approach to playing for Scotland. I think the fans love that."

Dodds, who now does punditry in addition to a coaching role at Queen of the South, is all for Scotland playing good technical football, but stays realistic.

"I know they want to but I don't see us having too much of the ball," he said. "I think we might be doing a wee bit of chasing because Belgium are excellent.

"I like to see it and I'm not being disrespectful to Scotland. It's just looking at the quality of opposition we're against, whether our players are good enough to get on the ball and have more possession remains to be seen."

"The one thing we can't do is lump it when we have players like Robert Snodgrass, Shaun Maloney and Scott Brown. Don't bypass them - you have to use them. That's why we're developing this passing style."

We might get an idea how quickly the new philosophy is progressing on Friday night.

Even if Scotland are on a hiding to nothing against the gifted Belgians, surely most of the Tartan Army would like to see it happen having at least attempted some enterprising passages of play.