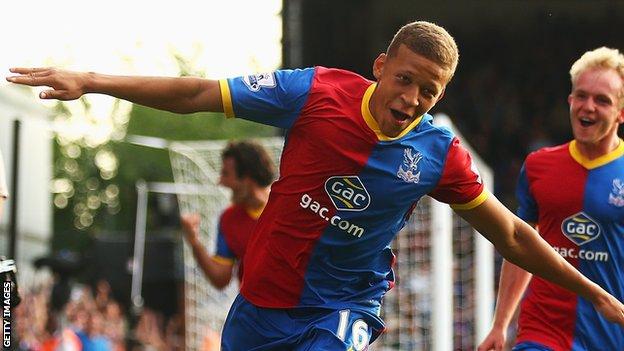 Two years ago Dwight Gayle was taking off with non-league Stansted. Now he is flying high in the Premier League.

a four-year contract and a first top-flight goal for new club Crystal Palace - all 24 months after the Essex Senior League did not know what hit it when the Gayle hurricane swept in 57 goals in one season.

But Palace's next big thing, who belied his 23 years to calmly is just the tip of the iceberg for Peterborough United, the self-proclaimed makers of millionaires.

Taken from the depths of English football, Posh have been the link for Gayle, Norwich's Ryan Bennett and Hull duo George Boyd and Aaron McLean to step into the Premier League.

Add to that Championship pair Craig Mackail-Smith, now with Brighton, and Ipswich's Paul Taylor, - London Road is where football's lost boys go to be found.

It pays to be Posh

"We will give young players the opportunity to use us as a stepping stone to become millionaires," Posh director of football Barry Fry told BBC Sport.

"There's half a dozen players who have left us who have become millionaires. It's a great system that works for us."

Concocted by chairman Darragh MacAnthony, who acquired the club from Fry six years ago, the cogs of that system started turning when Boyd, McLean and Mackail-Smith signed permanent deals in January 2007, going on to score 257 goals combined across five seasons.

Mackail-Smith made his way to Posh from Arlesey via Dagenham & Redbridge, Boyd left Stevenage and a part-time job in a sweet shop, and McLean was at Grays.

The pattern has continued, Gayle going from the Daggers, Taylor - following a troubled history - being snapped up on a free, and Tomlin was plying his trade with the now defunct Rushden & Diamonds.

Former Peterborough manager John Still sold Gayle and Mackail-Smith to Posh while Dagenham boss, briefly taking his own side up to League One for the first time in their history, and helping sprinkle the Football League with non-league diamonds.

"I actually think there are so many out there. They don't all make it but you need to work hard with them every day," said Still, now Luton manager.

"We were lucky at Dagenham; we found so many and sold them on - it ran the club for us. Without the money of selling them, we would never reach the level we did.

"Sometimes I don't think it's the right time for them to go. But what I always say to them about a club like Peterborough is they get a chance."

'Young and hungry' is the mantra around London Road - a promise to players that if they have the commitment, they can reach the top.

"We've had a good record at it. We put so much effort into making them and improving them," said boss Darren Ferguson.

"Everyone's said to me 'why have Palace spent a fortune on this boy? It's wasted money'.

"Never in a million years. He's got everything, this boy, a right foot, a left foot, good in the air and his hold up play is second to none.

"I wouldn't be surprised if he got in the England side."

"But I think the desire of the players to go on and better themselves is the most important thing."

While the financial rewards for Peterborough are high - Gayle was bought for £450,000 and joined Palace for about £5.5m, with the add-on clauses potentially taking it closer to £10m - the outlay is less so.

"All these lads were not on a lot of money," admits Fry.

"We do bring them in on not a lot of money and sell it to them as 'you'll get an opportunity if you're good enough'. Our biggest motto is ambition over greed.

"We took a gamble on all these players and they've turned up trumps."

Success has come in cycles for Posh, winning back-to-back promotions from League Two to the Championship between 2007 and 2009, before relegation, an instant return to the second tier and another demotion after two more seasons in the Championship.

A period of stability, in terms of a long run in the Championship, is a priority, but will they need to stretch beyond the role of Football League stepping stone to do it?

"If they hit it right at any given time Peterborough could have three, four, five years in the Championship," said Still.

"If they have to sell they might come down a bit. But I admire a club that understands that."

The model has already shifted slightly, with Britt Assombalonga dropping down from Watford in a £1.5m deal - a record signing for Peterborough.

But the result is the same: the 20-year-old has scored five times in his first seven Posh games.

And if history continues to repeat itself, he will be the next in a long line of Posh-made millionaires.