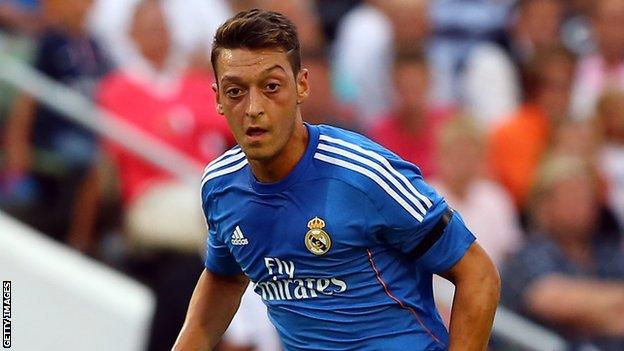 Arsenal record signing Mesut Ozil is confident they will end their eight-year wait to win a trophy this season.

Ozil, 24, signed a five-year deal when joining for £42.4m from Real Madrid on transfer deadline day.

Asked whether Arsenal could lift silverware this season for the first time since the 2005 FA Cup, he told Arsenal's website: "Definitely.

"In the last few years, Arsenal haven't been so successful but we want to become more successful."

Ozil was a member of the Real team that won La Liga in 2011-12 and was named in the Euro 2012 team of the tournament - and many in Madrid did not want the club to sell the player.

His arrival ended a summer of frustration in the transfer market for Arsenal, after they failed in high-profile attempts to sign Liverpool striker Luis Suarez and Real striker Gonzalo Higuain.

Ozil said his admiration for Wenger and the Frenchman's reputation for improving players had played a key role in his decision to sign.

"The coach is a world-class manager - he's demonstrated that for years," added Ozil. "A lot of players have developed under his guidance in the past and that's why I decided to join Arsenal.

"I want to improve myself further and I'm looking forward to the style of play. Arsenal are well known for the strength of their technical game and their desire to play attacking football. I think I will fit perfectly into that."

Ozil could make his debut for Arsenal when they travel to play Sunderland at Stadium of Light on Saturday, 14 September.