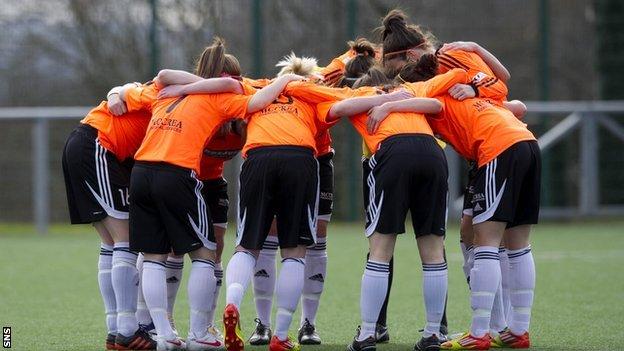 Glasgow City have been drawn against Standard Liege in the last 32 of the Champions League.

The Scottish Women's Premier League winners, who beat Twente to win qualifying Group 8, were seeded for the draw.

Glasgow will travel to Belgium for the first leg on 9 or 10 October before hosting the Belgians the week after.

Should City progress, they will play WFC SSHVSM Kairat of Kazakhstan or Arsenal Ladies in the last 16.

Britain's other representatives, Birmingham City, have been drawn against Finnish team PK-35 Vantaa in the Round of 32.

"It is obviously a favourable draw in terms of travel and being able to scout the opposition and get information about them," he added.

"In the last few years they have exited at the round of 32, but to be honest they have gone out against very good teams. For example Postdam last year, Brondby the year before and Montpellier before that.

"I know their squad is made up mostly of Belgian players and the fact that they finished second in the new Belgium/Dutch League last year tells you how difficult the tie will be.

"No doubt people are going to talk about a potential last 16 tie [against Arsenal Ladies] but it would be disrespectful to Standard Liege to even be thinking about that as they are a good side; we should all be focusing on taking each round as it comes."

Two seasons ago, Glasgow reached the last 16 for the first time, before a

And last season the Scottish champions were