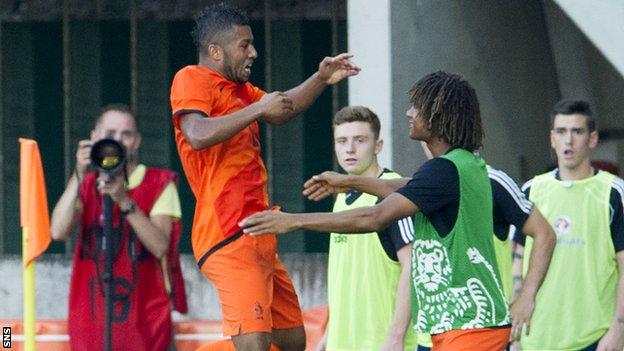 Scotland suffered a second-half collapse against a clinical Netherlands side in their Uefa European Under-21 Championship qualifier.

Scotland had the better of the first-half chances, with Stuart Armstrong, Tony Watt and Ryan Fraser going close.

But Tonny Trindade de Vilhena broke the deadlock on 52 minutes in Nijmegen.

Luc Castaignos, Mike van der Hoorn and Jesper Drost then added to the hosts' tally as the young Scots were picked off by the slick Dutch.

Billy Stark's team opened their Euro 2015 qualifying campaign with a comfortable home win against Luxembourg but this reverse follows last month's 6-0 thrashing by England in a friendly.

The former Aberdeen player first shot wide and then just failed to connect at the back post, with Celtic's Dylan McGeouch involved in both moves.

Armstrong then had a shot held by Warner Hahn before Watt forced a better save from the home goalkeeper, with the rebound almost going in off a defender.

Jordan Archer saved well from Quincy Promes at the other end before Armstrong had an even better chance to open the scoring when he burst through, but fired over with only the goalkeeper to beat.

And Scotland were made to pay for their misses early in the second half when Feyenoord midfielder Trindade de Vilhena lifted the ball over Archer.

The game turned firmly against the visitors following a crucial passage of play midway through the half. Fraser had another chance when his former Pittodrie team-mate Ryan Jack played him through, but his shot was blocked by the foot of Hahn.

Findlay then crashed a header off the post from McGeouch's corner but the hosts were 2-0 up within 120 seconds as Castaignos rifled past Archer in the 69th minute.

The beleaguered Scots fell further behind when Castaignos set up Drost to complete the scoring.