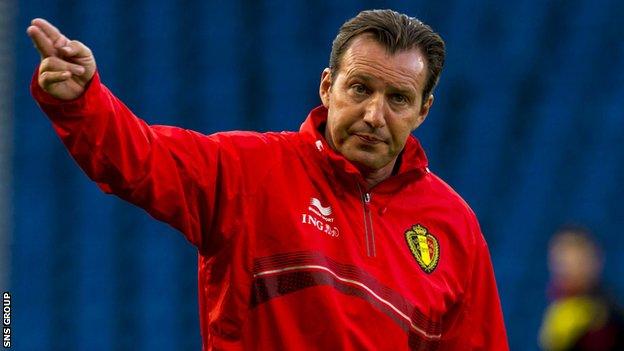 "We will suffer tomorrow, that's for sure," said Wilmots.

"Scotland are not that bad because they played two very good games against very good opponents, Croatia and England.

"They had a bad start to the group but now they are back. They are playing at home. They are already eliminated and they can play more relaxed, more free."

Scotland endured a miserable start to the campaign, including a 2-0 defeat in Brussels last October and sit second bottom of Group A, a distant 14 points behind leaders Belgium.

However, home spirits have been lifted by a surprise first group win in Croatia in June and a good performance in the first hour of a 3-2 friendly loss to England at Wembley last month.

"Scotland had a bad start to the group but now they are back," added Wilmots. "They are in a winning spirit, in a good spirit.

"They have a new coach and they had a great result against Croatia and a good game against England, where they were leading twice.

"They are in a good spirit to start this game."

Jan Vertonghen is an injury doubt for the visitors, along with Eden Hazard, Nacer Chadli and Axel Witsel.

And the Tottenham defender echoed his coach's thoughts ahead of the Hampden meeting.

"It will be a very hard game for us," he said. "We played them at home and they were very difficult to beat.

"At Hampden, it will be even more difficult. We will have to be at the top of our game. They did well against Croatia and England.

"I think we will see another Scotland. They looked very confident in their last two games.

"Everybody has to be at 100 per cent to beat Scotland."