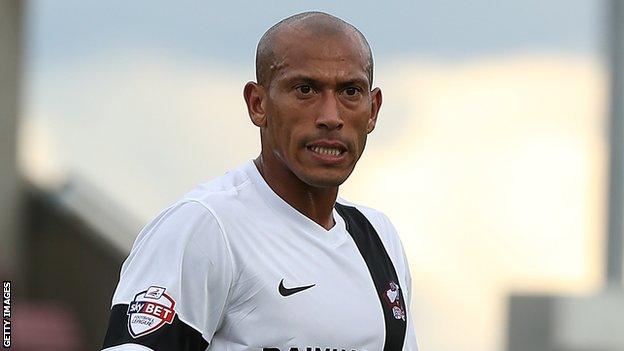 Chris Iwelumo's header gave Scunthorpe victory at Southend for their first win since the opening day of the season.

The hosts edged the balance of play in the first half, but visiting keeper Sam Slocombe was on hand to save headers from Ryan Leonard and Freddy Eastwood.

After the break, Shrimpers defender Ben Coker mistimed a header into the path of Iwelumo, who nodded the Iron ahead.

Kevan Hurst came closest to an equaliser with an effort that Slocombe tipped over, but Scunthorpe held on.

Scunthorpe, who looked much the better side after Iwelumo's effort, could have extended their lead when Eddie Nolan's header went just over and Sean McAllister's long-range strike forced a superb save from Daniel Bentley.

"We've got to learn to grow up quick. It's a brutal division, the lessons are out there for everybody to see.

"We lacked a little bit of intelligence with regards to how to win the game, we didn't manage the game properly in the second half.

"In the first half it was one-way traffic. If I'd had someone in the six-yard box we would have been two or three-nil up, but we didn't mange to do that.

"Things will turn in our favour if we keep on working at it."

"In the first half I thought they were really pressing us quickly - we were giving the ball away too cheaply and I said in the second half we have to keep the ball better and I thought we managed it better.

"I thought they [Southend] were fast out the traps today and you could see they were a team that had lost a few games and they were desperately wanting to do well at home.

"They were pressing us, on a really difficult surface, that was the issue because we can play but we just didn't pass it and we weren't as comfortable on the ball. But then once we kept the ball better, I thought there was better movement on the ball and more calmness when we had it."