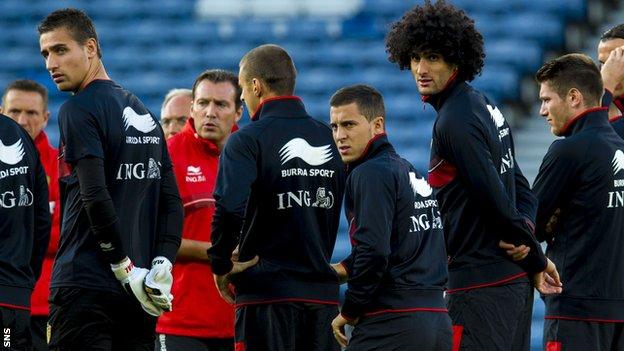 Former Scotland manager Craig Brown is confident that the best the talented Belgians will achieve is a draw.

Brown was impressed by Gordon Strachan's side in their and a

" are one of the top countries not just in Europe but the world at the moment," said Brown.

"But, if we get a performance like we got in the last two matches, I don't think anyone will win at Hampden."

When an international team meets, there is a good camaraderie normally, but I think Gordon has got that wee bit of extra impact

The Scots entertain the World Cup qualifying Group A leaders without any chance of reaching next year's finals in Brazil after a poor start to the campaign.

Although Brown admits that the Scots he believes the future is bright under Strachan.

"The progress that Scotland are making - and will make in the future - is good," he told BBC Scotland.

"I'm looking at the last two performances and any team coming to Hampden will be concerned about playing Scotland in Glasgow."

Brown thinks the improvement since the departure of Craig Levein as national coach is down to Strachan's personality.

"The one thing I notice is that the morale has changed totally," he said.

"When an international team meets, there is a good camaraderie normally, but I think Gordon has got that wee bit of extra impact.

"He's a bubbly personality and it rubs off on the players and I notice that everyone is up for the challenge now and there are fewer players unable to appear through injury."

Brown admits to concern about Kenny Miller's decision to retire from international football.

With Steven Fletcher having just returned to fitness with Sunderland, Leigh Griffiths, Jordan Rhodes and Jamie Mackie are all vying for a starting place.

"Kenny was a lone striker and did the job exceptionally well," said Brown. "I don't think there's an obvious replacement.

"Although they have left out Steven Fletcher for now, I think that's until he gets match fit and plays more games for his club."

Much has been made of Belgium's current crop of talented players being down to the much-touted restructuring of their youth system by Michel Sablon.

"I don't think it is solely that," Brown suggested. "Good crops of players come in cycles and I think it is just pure good fortune."