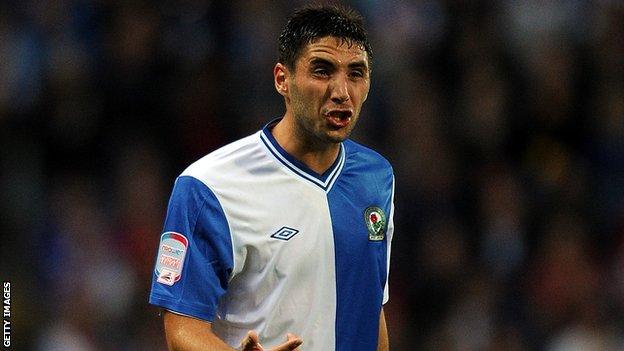 Full-back Bradley Orr believes his career at Blackburn Rovers is over.

The 30-year-old, who until January, has endured a difficult relationship with Rovers supporters.

"There's a culmination of events and factors behind that. I wish them all the best, but I wouldn't see myself playing for them again."

Orr moved to Ewood Park from QPR in January 2012, while Rovers were in the Premier League, and has made 34 appearances for the club.

However, some fans after he on the evening Blackburn were relegated from the top flight.

Since then, Orr has spent time on loan at Ipswich and has not featured for the first team since April.

"I really hope they do well, but it's been really difficult to win the fans round and also get my head around the politics that goes on behind the scenes there," he said.

"It's something I've never really been used to.

"What's happened - I wouldn't change any of it for the world. It's made me stronger and I stand by everything I've done and said in the past. I've got my principles and my morals firmly in tact.

"If anyone in the dressing room was asked about it, I would like them to say he stood up for people when, at times, others wouldn't."

Meanwhile, Blackpool manager Paul Ince has won the Championship's manager of the month award for August.

After a frustrating summer in the transfer market, the Seasiders sit top of the table with four wins and a draw from their opening five matches.

"We had six or eight kids over with us [for a pre-season tour] in Portugal, which is not the right preparation to start a very tough Championship season.

"When you look at it from that point of view, it's been a marvellous start and something that I couldn't have envisaged before Portugal.

"It's always nice to be recognised when you've done well, but it's not about me. The reason why I've got this award is because of the players because they've been outstanding for me."