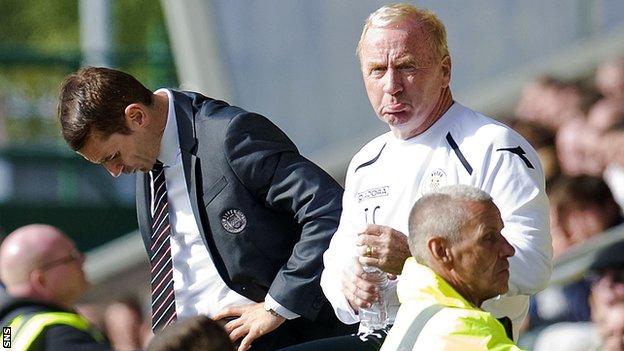 St Mirren manager Danny Lennon believes he will be given time to improve his side's poor form and pay back the faith shown in him by the club's board.

Lennon had talks with the board following a that heaped further pressure on the 44-year-old.

"They are very supportive and they want us all to do well," he insisted.

"I certainly believe, with the faith they are showing in me, that we can turn this slow start around."

The Buddies have not won this season, winning once since winning the League Cup in March, and were knocked out in the first round of this season's competition by Championship outfit Queen of the South.

"I certainly believe in my own ability," said Lennon. "I look over my short career as a manager so far; five years and two back-to-back promotions with Cowdenbeath.

We had a very good honest, open discussion on Monday and we are all sharing the same frustrations and all want the same answers

"I took St Mirren to their highest SPL finish and I've also given them silverware.

"That shows I do have some kind of ability and, given the time, I will certainly turn this slow start around for us.

"I will certainly keep this team in the league and look to take them up to the right end of the table."

St Mirren sit eleventh in the Scottish Premiership table, with bottom side Hearts, who started with a 15-point penalty having already narrowed that gap by seven points.

However, and says history shows that clubs are rewarded for standing by their managers.

"Even look at the great Sir Alex Ferguson," he said. "In his first three years at Man United, he goes through a nine-game winless streak.

"It took him seven years to win his first Premier League and there were a lot of people questioning his skills and ability and now he is renowned as one of the best managers in the world.

"An experienced man in the game sent me a piece and it was about a Dutch professor who did a study over 18 years about football clubs at the highest levels who went through blips. Some managers would get sacked and other managers would get backing and time to turn it around.

"The ones who out-performed any were the ones who were given that opportunity to turn it around."

Lennon says that the defeat at home to promoted Thistle led to frank discussions with his assistant.

"I've got a very good right-hand man in Tommy Craig," he added.

"We had a very good honest, open discussion on Monday and we are all sharing the same frustrations and all want the same answers."