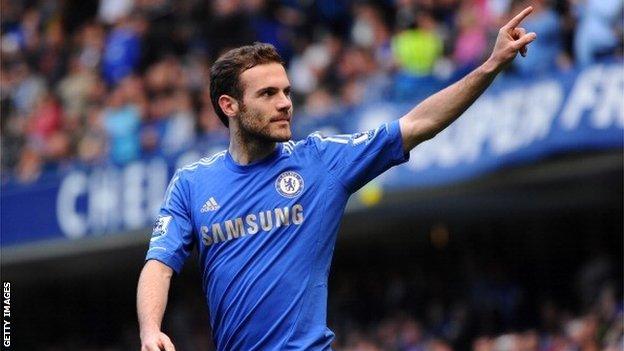 Midfielder Juan Mata insists he is happy at Chelsea despite widespread speculation about his future during the recent transfer window.

The Spain international, 25, was named Chelsea's player of the year last term.

But he has played only 65 minutes of competitive football for the Blues this season under boss Jose Mourinho, who returned to take charge in the summer.

"It's normal in every transfer window that there are lots of rumours but I'm happy here," Mata told Chelsea TV.

"It's been a very, very good two seasons for me here, maybe the best of my career, and what I want this season is the same.

"I'm looking forward to achieving as many trophies as we did the last two seasons and hopefully this is going to be a good season for us again."

Mata was linked with moves to Paris St-Germain and Arsenal as the transfer window drew to a close, despite Mourinho's insistence that the player was not for sale.