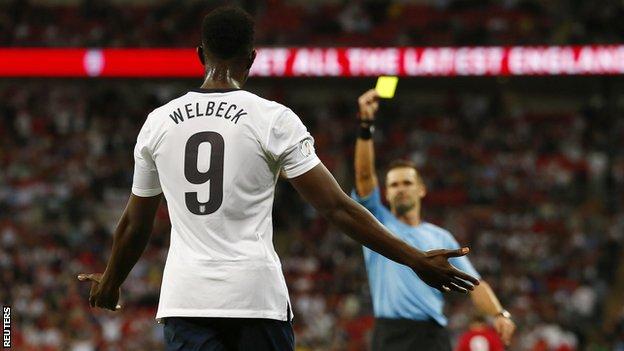 Welbeck, 22, will miss Tuesday's trip to Kiev after being booked for kicking the ball away at Wembley.

Hodgson described the yellow card as "more than harsh" and bemoaned the absence of another of his forwards.

He told ITV: "We had already lost Wayne Rooney and Daniel Sturridge. It takes the gloss off a good performance."

Welbeck scored twice in the victory over Moldova, with Rickie Lambert and Steven Gerrard joining him on the scoresheet, but the Manchester United forward was shown his second yellow card of the qualifying campaign before scoring his first goal.

His one-game ban comes with England's striking options already weakened by his United team-mate Rooney's withdrawal with a deep cut on his forehead and the heel injury sustained by West Ham's Andy Carroll.

Liverpool striker Sturridge, who has scored three goals in as many Premier League games this season, was ruled out of Friday's match with a thigh problem and is a doubt for the Ukraine game.

"The thing that is a major, major negative is, after losing two centre-forwards of great quality, I have now lost a third one for a second booking," Hodgson told BBC Radio 5 live.

"For the first one against Montenegro, when we should have had a penalty, he was accused of diving.

Welbeck on the rise

Danny Welbeck, who misses Tuesday's match against Ukraine through suspension, has scored six times in his past seven England appearances, and has scored with eight of his 10 shots on target for England

"For the second one, he has had a shot after a great run and the referee has said he is wasting time. It was more than harsh.

"I really find it hard to think that there is anyone out there who will look at that and say they understand it was a correct decision."

Despite Southampton's Lambert and Jermain Defoe of Tottenham being the only orthodox strikers in the squad currently available to face Ukraine, Hodgson is not planning to call up a replacement.

"I suppose one would, if there were very obvious candidates," the 66-year-old said.

"I think we worked very hard through the candidates, and with Andy Carroll still injured, you would have to be going way back to think of people to bring in."

England now top Group H on goal difference, after Montenegro drew 1-1 in Poland, and are a point ahead of third-placed Ukraine after playing the same number of games.

"If we get seven points from our remaining three matches we cannot be knocked off our top spot," Hodgson said. "We also may even have to face the prospect of ensuring we finish second to ensure we get one of the play-off spots.

"Today was good for us in that respect. But Tuesday's game remains one of the crucial fixtures. We always knew it would be."