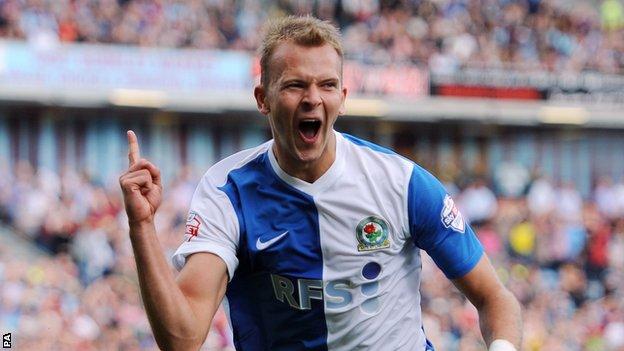 Jordan Rhodes took advantage of a Burnley defensive mix-up to earn Blackburn Rovers a point at Turf Moor and extend their 34-year unbeaten run against their fierce derby rivals.

Clarets substitute Junior Stanislas gave his side a 76th-minute lead to reward their pressure.

But, after Scott Arfield's poor back-pass, Michael Duff's clearance cannoned off Rhodes and into the net.

Rovers's Lee Williamson was sent off for an injury-time professional foul.

Burnley striker Danny Ings was racing clear as a sluggish Williamson was caught out for pace, with the midfielder cynically hauling down Ings to possibly save his team a point.

The hosts only had themselves to blame for their failure to end their winless run against their east Lancashire rivals, though, with Rhodes's equaliser - his fifth goal in three games - all of their own making.

This was the 100th competitive east Lancashire derby. Blackburn had won 41 of the previous 99 and Burnley had 38 victories to their name

Arfield's under-hit back-pass put the striker in on goal and, after the chance looked to have gone, Duff's desperate clearance hit Rhodes's shin and went into the net.

Burnley, who were looking to move top of the Championship, had the better of the first 45 minutes as their high-tempo approach caused their visitors problems.

They almost had the dream start when goalkeeper Jake Kean's clearance struck onrushing striker Sam Vokes, only to bounce inches wide of the gaping net, before Kieran Trippier saw a 20-yard free-kick go just over.

Kean redeemed himself on 18 minutes, producing a double save from Arfield and the lively Ings, before Rhodes bundled Blackburn's first chance over from close range after Josh King's pace got him in behind Burnley's defence down the left.

Rhodes was looking isolated on his own up front but the home side's dominance was let down too often by poor decision-making and a lack of quality with their final ball.

And home goalkeeper Tom Heaton was called into action on 37 minutes, brilliantly turning Tom Cairney's low strike wide after a driving run from right-back Todd Kane, but Blackburn would have been happy to reach half-time still level.

The second half was more a cagey affair with neither side wanting to make the mistake to give their local rivals the bragging rights.

Blackburn enjoyed more of the ball and went close on 67 minutes when Scott Dann's looping header hit the top of the bar. A minute later Grant Hanley headed wide from close range as the visitors built some pressure,

It was Stanislas, though, who broke the deadlock 14 minutes from time, playing a one-two with Ings before firing home from 20 yards.

But as the Turf Moor crowd began to dream of a long-awaited victory, Rhodes's 85th-minute intervention snatched a point for his side.

"It's not a great decision from Scott but the way it's gone in is truly incredible.

"It could bounce anywhere and it happens to spin over your goalkeeper.

"In all the games against Blackburn since I've been manager, I think we've done enough in every game to win it."

"When we go 1-0 down with just over 10 minutes to go, and the average age of the team is 22, you do wonder and question how they're going to react.

"But, in this environment, we've got nothing but praise for them because they came back with a fantastic attitude and spirit, and in my opinion fully deserved the equaliser."