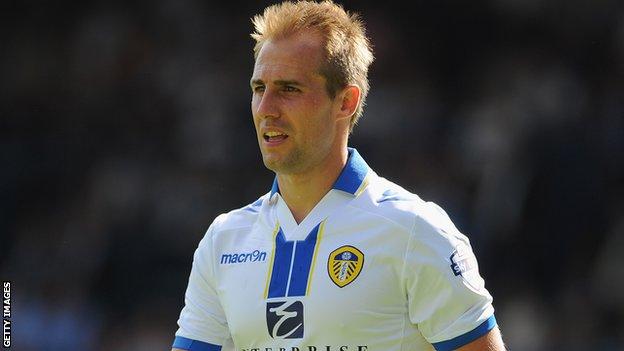 It was the first time Leeds had opened the scoring in a league match this season as Varney headed home at the near post after just six minutes.

David Ngog and Darren Pratley both went close for the home side, but found Paddy Kenny in the Leeds goal in excellent form.

Bolton started the campaign among the favourites for promotion after just missing out on a place in last season's play-offs on goal difference.

However, so far this season they have managed just two points after draws with Burnley and Reading.

Jermaine Beckford, who scored 72 goals in 115 league starts for Leeds, was left on the bench by Bolton who at times looked devoid of ideas in attack.

Instead Ngog, who has scored only 11 goals in two years at Bolton, led the line.

The win for Leeds moves them up to sixth in the table, five points behind joint leaders Blackpool and Queens Park Rangers.

"Have we given up on automatic promotion? We'll never give up. Anything can happen in professional sport.

"Obviously we're disappointed with the result. To concede a goal after seven minutes was disappointing but we didn't have too many clear opportunities and that's the biggest disappointment.

"I'm certainly not worried because this is professional sport. You have your ups and downs but we've really got to start games better."

"To come away and win 1-0 at Bolton is a great result.

"We've been working at our set plays because they've been really important to us and it was a great delivery and a really good header from Luke (Varney)."