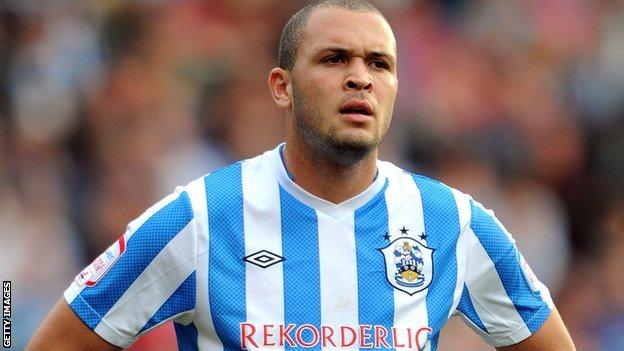 Huddersfield defender Joel Lynch came agonisingly close to claiming all three points late on as the Terriers and Doncaster played out a goalless draw.

Lynch saw his close-range effort hit the angle of post and crossbar before bouncing up and striking the bar again, after being set up by Adam Clayton.

Doncaster's Chris Brown had an early effort cleared off the line.

The striker also headed wide as Huddersfield remained unbeaten at the John Smith's Stadium since March.

Doncaster, who are unbeaten in six games against Town, should have been in front at the break after a commanding first-half display.

Former Huddersfield striker Theo Robinson, David Cotterill and Brown all went close, with the home side limited to a James Vaughan penalty appeal before the interval.

Home substitute Jonathan Stead forced Ross Turnbull into a good save just moments after coming on in the second half and later set up the unmarked Jonathan Hogg, who somehow blazed over.

Brown went close for Doncaster on 82 minutes before Lynch's effort nearly secured victory for the hosts two minutes from time.

"I was disappointed at half-time because I thought we could have had a couple of goals.

"We created chance after chance but couldn't put one away. Overall I am reasonably pleased because we saw a reaction from the players and we were solid.

"A clean sheet is a positive and a point is a positive too. Huddersfield is a difficult place to come and they were always going to put us under pressure in the second half."

"They were unfortunate not to be at least a goal up in the first half and we were a lot better in the second half.

"In all honesty I can't remember them having a clear-cut chance in the second half. A clean sheet is good and a point is a fair result.

"We want to be better but it's still early days in our season. We created a number of good chances and on another day they would have gone in."