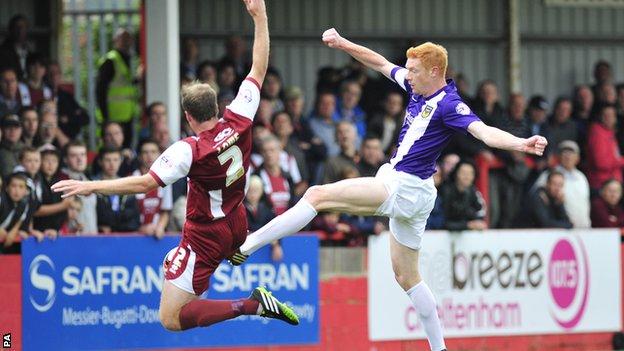 Oxford twice came from behind to draw with Cheltenham to continue their unbeaten run in League Two.

Byron Harrison stroked in from close range to put Cheltenham ahead early on, but Dave Kitson netted his first goal of the season to bring the U's level.

The hosts regained the lead shortly after the restart when Terry Gornell poked home from inside the box.

But Oxford hit back once again, centre-back Johnny Mullins lashing in to the bottom left corner.

Cheltenham had a penalty shout late on, after Mullins appeared to handle in the area, but their appeals were waved away.

The result means Oxford have claimed 15 points from seven games and sit second in the table while Cheltenham, last season's play-off semi-finalists, are 20th with only one win so far this term.

The Robins started brightly and took the lead on eight minutes when Harrison tapped in after keeper Ryan Clarke had parried Gornell's shot in to his path.

Gornell pounced to give the hosts the advantage again but it lasted only six minutes, as Mullins finished well to deny Mark Yates' side three points.

"We're up and running now, that's our season started today. It took us seven games but that was a proper performance and I need 39 more.

"We battered them, we were a better team. We set the tone with our aggression and closing down and pressing and played some good stuff at the same time.

"We'll get there with performances like that, and the spirit shown, that'll do for me."