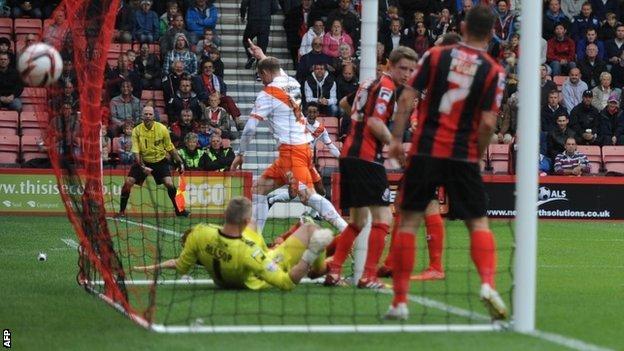 Ricardo Fuller and Neal Bishop scored their first goals for Blackpool as they beat Bournemouth to make this their best start to a league season.

Fuller's seventh-minute header was cancelled out by Lewis Grabban, before Bishop's headed winner on 47 minutes.

Blackpool's Jack Robinson was sent off on the hour and manager Paul Ince was sent to the stands late on.

Ince apologised to a female fan after a bottle he threw inadvertently hit her, prompting his dismissal.

Blackpool went into the game as one of only two unbeaten teams in the division - Queens Park Rangers being the other - and seeking their third win in a row.

And striker Fuller gave them a great start as he pounced on a long throw-in to open the scoring.

The lead was short-lived, though, as Grabban fired a left-footed volley past Matt Gilks, before going close with a deflected effort.

Tom Ince, making his first start of the season, should have restored Blackpool's advantage before the break but struck the post after being put through by the impressive Fuller.

But the visitors did retake the lead three minutes after the break as Bishop headed home Ince's whipped delivery.

Robinson, on loan from Liverpool, was sent off after being shown two yellow cards for fouls on tricky winger Ryan Fraser, but Bournemouth struggled to convert their numerical advantage into clear-cut chances.

Indeed the Seasiders pushed for a third late on and when Nathan Delfouneso missed a glorious chance, Paul Ince threw a water bottle at his own dug-out in anger.

The bottle struck a watching supporter, to whom Ince "immediately apologised" according to his assistant Alex Rae.

Referee Oliver Langford sent the former England midfielder to the stands, but his absence did not prevent his side from holding on for victory.