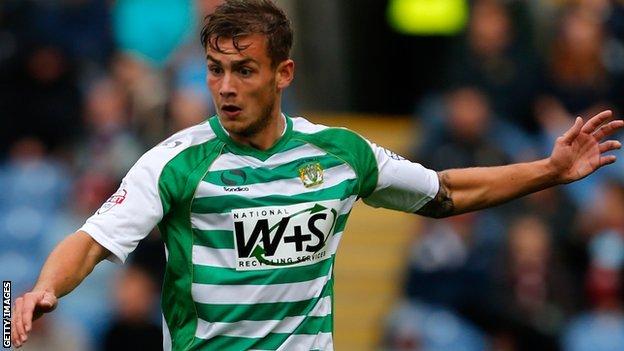 Sheffield Wednesday remain without a win this season after drawing with 10-man Yeovil at Hillsborough.

Atdhe Nuhiu scored a controversial opener for the hosts when he turned home a Michail Antonio cross having been offside earlier in the move.

Yeovil's Byron Webster was sent off just before the break after appearing to strike Nuhiu, but his side levelled through loanee Joe Ralls on 64 minutes.

The result leaves both sides in the bottom six of the Championship.

Dave Jones's Owls have now drawn four matches in a row and dropped 11 points from winning positions this season.

Yeovil almost took the lead early on but James Hayter's effort was cleared off the line before Nuhiu opened the scoring.

The Austrian was offside from the initial ball forward, but left it to the advancing Antonio, who crossed for Nuhiu to finish.

Referee Geoff Eltringham awarded the goal to the frustration of Yeovil's players, who responded well when Andy Williams had a header saved by Chris Kirkland.

Webster was dismissed after a tussle with the goalscorer shortly before half-time, but Wednesday could not close out a first victory.

Ralls, on loan from Cardiff City, gathered a long ball on 64 minutes to coolly slot home his first goal for the club and earn them their first point in five matches.

"It's frustrating for everybody. I felt we froze a little bit.

"We didn't get it down, we didn't pop it about, we didn't get down the sides of them, too many people weren't looking for the ball and our decision making was poor so we have to hold our hands up and say that's a poor, poor performance from us in the second half.

"Listen, it's a goal, they aren't offside the linesman had it wrong and it's a sending off because he's [Byron Webster] punched him."

"Nobody understands these offside rules, especially these referees. They seem to make it up as they go along.

"I was very proud of my players but I was disappointed with our vice-captain who got sent off.

"We can't afford to go down to 10 men, he's apologised to the lads and we've accepted that but then the 10 men had to give 10% extra in the second half."