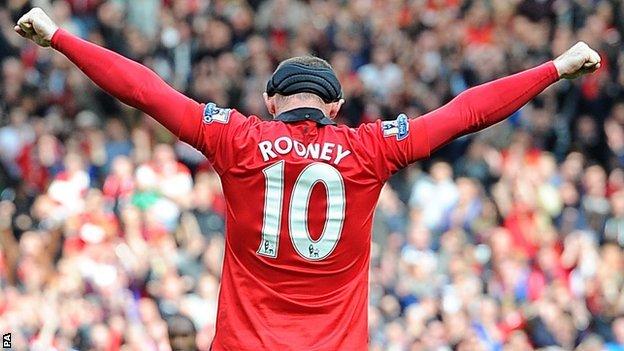 Van Persie slotted in a 45th-minute spot-kick after Kagisho Dikgacoi was adjudged to have fouled Ashley Young.

Dikgacoi was red-carded, with Palace unhappy at the decision and arguing the offence took place outside the area.

Marouane Fellaini came on after 62 minutes to make his United debut before Wayne Rooney scored from a free-kick.

Moyes will be relieved at the three points after one Premier League win from his opening three games, while he will also welcome the scoring return of Rooney ahead of a Champions League group match against Bayer Leverkusen on Tuesday.

However, on the whole, United struggled to break down their stubborn visitors - even when Palace were down to 10 men - in an unconvincing performance watched by former manager Sir Alex Ferguson.

The Eagles will be left aggrieved by a dubious penalty decision by referee Jon Moss which had such a big bearing on the match.

Palace manager Ian Holloway had to watch from the stands as he but his strategy was to contain United and hope to catch them out on the counter-attack.

The game plan invited pressure, but the visitors slowly becalmed their hosts with a disciplined and organised rearguard.

"Man Utd have given manager David Moyes a first league win at home but they needed a controversial Robin van Persie penalty and a late Wayne Rooney free-kick to do it. Palace were spirited and resilient as they were forced to play with 10 men for just over half the match. The penalty decision looked harsh and contact appeared to be just outside the area."

United had not scored in their previous two league games and, apart from having a long-range Michael Carrick shot saved, they were being frustrated by Palace.

The Old Trafford side also had two penalty shouts turned down, with the first waved away after Patrice Evra went down following a Mile Jedinak challenge.

Young also went to ground following a Dikgacoi tackle but the United winger was booked for diving instead of being awarded a spot-kick.

As the first half drew to a close, there was a flurry of activity. Van Persie's near-post flick from a low Evra cross went wide before the Dutch striker beautifully controlled a floated Rooney ball and volleyed against the crossbar.

At the other end, Palace forward Dwight Gayle excellently controlled a cross and went past centre-back Rio Ferdinand only to dink his shot wide of onrushing keeper David De Gea.

Then came the main moment of contention in the match as Jedinak gave the ball away to Young, who was clean through on goal before going down as Dikgacoi came across to block him.

The referee pointed to the spot and sent off the Palace midfielder before Van Persie sent keeper Julian Speroni the wrong way from the spot.

Palace felt wronged by the decision but regrouped and continued to show resilience to limit the damage, although the minor goal threat they had carried was blunted by the sending off.

United were doing all the attacking and went close when a Young shot was parried by Speroni, who then pushed away a well-struck Fellaini half-volley.

The Old Trafford side did eventually extend their lead when Rooney curled in a 25-yard free-kick as United extended a run of nearly 12 years unbeaten on home soil against newly promoted teams.

"My opinion doesn't count because the rules are the rules. I just have to deal with it and would rather talk about that and the team and the pride I feel.

"The referee has a difficult job to do and, with a crowd like that that, I wouldn't like to do it.

"I am disappointed in the fact we lost but not in the manner we lost it, behaved and applied ourselves. It was as good a performance with 10 men as I have seen for a long time. Hopefully we can gain some solace from that.

"We relaxed and looked like we came of age. We were much, much better in the second half."