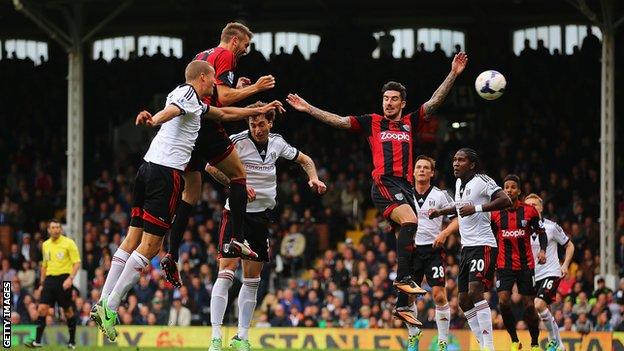 Fulham midfielder Steve Sidwell opened the scoring with a fine half-volley from a corner in the first half.

But West Brom salvaged a point late on when McAuley climbed highest to head home from a Chris Brunt corner.

Clarke - who also gave a debut to Marseille loanee Morgan Amalfitano - will probably feel fortunate to escape with a point from a game dominated by the home side.

Fulham monopolised possession in the early stages but were unable to find a way through with West Brom packing men behind the ball.

Predictably, the opening goal came from a set-piece as Sidwell, on his 400th career appearance, capitalised from Fulham's first corner of the game.

Alex Kacaniklic's high delivery was contested by McAuley and Philippe Senderos - but the ball dropped to Sidwell and though West Brom goalkeeper Boaz Myhill got a hand to his sweetly struck half-volley, he could not prevent it crossing the line.

Fulham had the ball in the net again on the half-hour mark when Dimitar Berbatov tapped in from close range, but the assistant referee had already flagged for offside.

"Finally West Brom manager Steve Clarke has seen his side score a goal although Gareth McAuley was perhaps an unlikely source for it. This result will feel like a victory for the Baggies, it probably should have been for Fulham."

In the second half, Anichebe was denied by Stockdale after showing good strength to hold off Brede Hangeland.

Bulgaria forward Berbatov looked Fulham's most likely source of a second goal and went close with a spectacular volley which went just over the crossbar on the hour.

Nicolas Anelka had a rare sight of goal when he shot first time from Anchiebe's lay-off, but a diving Stockdale was in the way again.

Bryan Ruiz struck the bar late on and Hugo Rodallega was offside when he blasted the rebound into the net.

But West Brom were back on level terms in stoppage time through Northern Ireland's McAuley, who is in good goalscoring form after netting against Luxembourg and Portugal during the international break.

Brunt floated in a corner and McAuley leapt above the Fulham defence to direct a powerful header beyond Stockdale.

"It was a frustrating result for us. The only thing you can do with a 1-0 scoreline late on is to defend. To concede a goal from a corner kick is disappointing and we lost two points because of that.

"We had our opportunities. We didn't play fantastic but I thought we did enough to win the game. We had the ball in the net a few times which were offside which is unfortunate.

"I thought we looked a bit tired with this game coming after the international break but if you get a second goal then you don't feel it. As long as it stays 1-0 you give the opposition a chance."

"The players know that to win matches we have to score goals.

"The belief of the players to keep chasing the game and get the goal in injury time shows the character that we have in the group.

"Three or four players have only just come in and we have only just started to work with them. There is more to come from us and I felt there were signs we're going in the right direction."