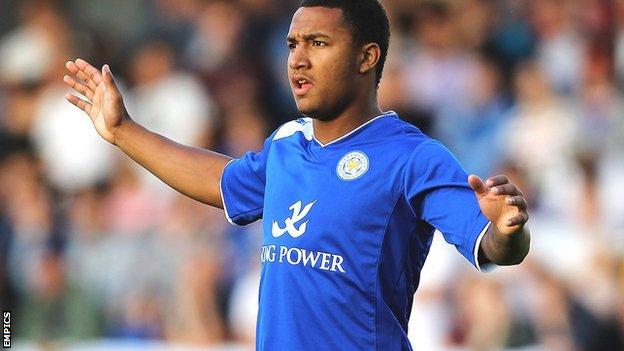 Liam Moore scored his first goal for Leicester City as they secured a well-deserved win over Wigan Athletic.

Suspended Foxes boss Nigel Pearson had to watch from the stands but it made little odds as the hosts dominated.

Moore put City ahead when he headed into home after 15 minutes.

Anthony Knockaert and David Nugent went close to making it 2-0 but Leicester had to wait until late on to ensure a fourth win in six league games when Nugent scored from the penalty spot.

This was only the third meeting between Leicester and Wigan. Their only previous encounters were in the Championship in 2004, when the match at the DW Stadium ended goalless and Wigan won the return fixture 2-0 on their way to winning promotion to the Premier League.

Wigan struggled to cope with the home side's pace and creativity early on and Nugent shot just wide while Vardy just failed to put Andy King clear with a neat pass on the edge of the penalty area.

Leicester's pressure told when Moore rose unchallenged at the far post to power a header into the roof of the net from Knockaert's corner.

Wigan rarely threatened but midfielder Ben Watson was only just off target with a 25-yard free-kick.

Leon Barnett's crisp shot forced Kasper Schmeichel into his first save just before the break but the home side continued to have the upper hand.

Wigan boss Owen Coyle brought on three substitutes in an attempt to change his side's fortunes after an hour - including Manchester United loanee Nick Powell.

But Leicester were on top. Nugent volleyed wide after good work by Vardy but the same combination did finally produce a second goal when Vardy was tripped by Jean Beausejour and Nugent hammered home the spot-kick.

"It was a good match and a good performance by us. Liam played his part in a very good team performance. It's the first time he has scored and a reward for the way he has worked at his game in the last 12 to 15 months.

"We've controlled the majority of the game and, even when Wigan had a little more possession just before we went 2-0 up, we've been fairly comfortable.

"We've beaten a side who will do well and have some very good players. We used Jamie Vardy to stretch them with his pace and he caused them problems.

"I'm pretty pleased with how the season has started. We've shown we can win games when we're not playing well but today we did. You could argue it was our best all-round team performance of the season."

"We got the rough end of two decisions. It was a stonewall penalty when Fortune was fouled, then Vardy has got on the wrong side of Beausejour and it's not a penalty.

"We came into the game on the back of a terrific performance against Forest looking for three points but we did not play as well as we can.

"It was very disappointing to concede such a soft goal. It was a good header but he (Liam Moore) hasn't been marked. There were only three or four players with plus marks when you need seven or eight. If I could have used all seven substitutes, I would have done.

"Yet we had the momentum and looked like equalising until they got the penalty. This league is about 46 games not six, and we will get better. There's still a lot for us to look forward to."