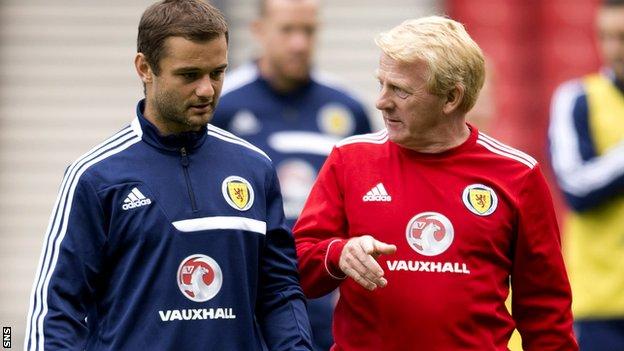 Scotland's Shaun Maloney says preventing a bottom-place finish in World Cup qualifying Group A will be their motivation against Macedonia.

Friday's put Scotland last - one point behind Wales, who have a game in hand.

"We certainly don't want to finish bottom and we'll be trying our hardest to win," Maloney told BBC Scotland.

"In the last few games there's been little signs of recovery and I really hope that that's the case on Tuesday."

Belgium's Steven Defour and Kevin Mirallas scored the goals to ensure Scotland are still without a home win in a disappointing qualifying campaign for Brazil 2014.

An away loss to Serbia in March ended Scotland's hopes of qualifying for the competition, but a subsequent 1-0 victory in Croatia gave the country hope of better fortunes under manager Gordon Strachan, who succeeded Craig Levein in January.

Tuesday's match in Skopje is Scotland's penultimate Group A fixture.

"I think we've started on the road to trying to become a better team," added Maloney, who has been capped 31 times by his country.

"There's just been a little feeling in the last few games that we've got a little bit better. We've just got to continue that.

"We've also got a reasonably new manager, he's putting his own stamp on things. He's brought in younger players to the squad. They're small building blocks."

But Norwich defender Steven Whittaker insists the squad at Strachan's disposal is better than a lot of people think.

"We believe we've got the players in that changing room to get the results," said the 29-year-old. "The performances have been there the last few games and we want the results to match that now.

"We keep wanting to progress, we feel like we've done that under this new manager.

"Obviously Macedonia's going to be a tough game but we believe we can go there, get a result and then we've got Croatia at home. Hopefully, again, we can get momentum."