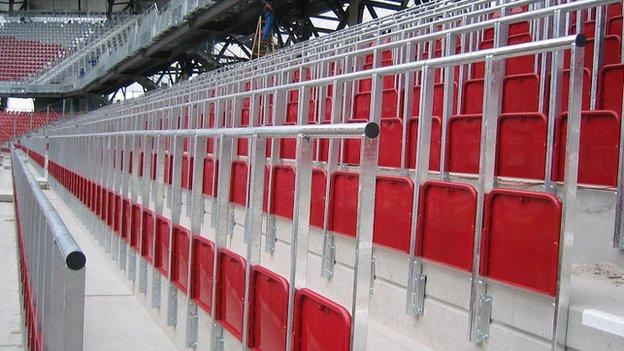 The Wasps are among the most competitively priced clubs, according to the BBC's Price of Football study.

And Mulraney hopes to see standing areas, like those in Germany, adopted.

"There is great opportunity for value for money but that can only be adopted if we look at that different option," he told BBC Scotland.

"Everyone in football is looking at what's happening in Germany. They've proved that safe standing is not only safe, it allows a whole array of pricing structures to be implemented into football.

"There's a stratified pricing structure that takes you from £12 to £100 for a standard ticket entry.

"By putting in safe standing, the atmosphere improves, the media likes watching it whereas people still go out to the game.

"That can only be adopted by allowing more people into our ground to watch football as they want to watch it, which is standing up, in a safe environment."

Terraces were banned following the Hillsborough disaster in 1989 and since all-seater stadiums became compulsory in England in 1994.

Scotland is not bound by the law which banned standing areas in top-flight football in England.

SPFL chief executive Neil Doncaster admits the issue of standing at football grounds is an "emotive" one.

"We introduced rules last season that allowed pilot schemes to be introduced for standing areas within grounds," he said.

"There is a different culture there and certainly local companies around German clubs have a long history of having very direct, very substantial involvement in the finances of their local clubs, which effectively makes it cheaper for everyone else who wants to go.

"We need to keep a genuinely open mind about anything which is going to enhance the spectacle and enhance the experience for fans who want to come out and enjoy a day out at their football club."

Mulraney sees community engagement as a must for clubs looking to build a loyal support.

"The families expect to be entertained and that's one of the big challenges, particularly for lower level Scottish clubs," he added.

"It's a massive leap that we've got to make as clubs.

"In Alloa we've spent an enormous amount of money, a significant seven-figure sum on upgrading our stadium because people expect more, and quite rightly.

"Once our community value us, we get what we need, which is that absolute loyalty forever. People don't change their football club once they've got them."