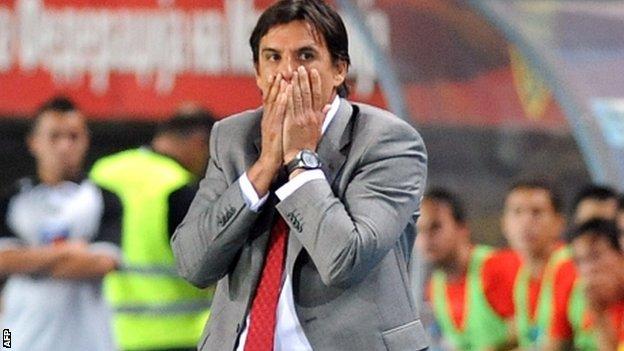 Ricketts and Williams both picked up injuries in Wales' 2-1 defeat in Macedonia on Friday.

Manager Chris Coleman will also be without suspended captain Ashley Williams for Tuesday's game in Cardiff.

"We're thin on the ground going into Serbia, which is not great," Coleman said.

Wolves defender Ricketts won his 50th Wales cap in Skopje, while the absence of 19-year-old Crystal Palace midfielder Williams would be a blow for Coleman, who said world-record signing Gareth Bale was unlikely to start against Serbia after he was kept on the bench in Macedonia.

"Sam Ricketts is limping heavily and Jonny got a boot on his foot and he's on crutches, so that's not great," Coleman added.

"The way they've come off the pitch, it's going to be tough for us.

"Ash had a yellow card, which will leave him out. We're already without Joe Allen plus Gareth is obviously not going to be able to start.

"We are thin on the ground but the game is there, and we've got to try to get something out of it."

Reading's Hal Robson-Kanu, who missed the defeat in Skopje through suspension, is available for Tuesday's game in Cardiff when Wales face a side who beat them 6-1 last year.

Against Macedonia, Wales fell behind to Ivan Trickovski's 21st-minute opener only for Aaron Ramsey to level from the penalty spot six minutes before the interval.

However Aleksandar Trajkovski's late goal sealed victory for the home side, inflicting Wales' fifth defeat in Group A.

Coleman was full of praise for Arsenal's Ramsey, who has been in good form so far this season for club and country.

"Rambo at the minute, when he's playing for Arsenal or for Wales, has been outstanding.

"He's been bossing games. It's the best form I've seen him in. Long may that continue."